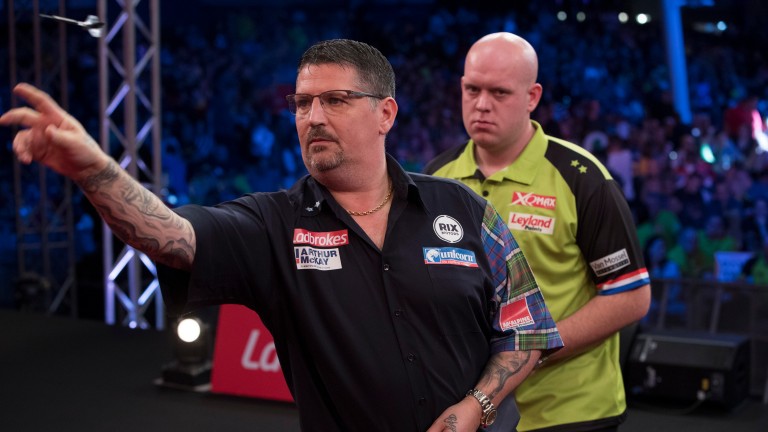 Gary Anderson may have been expecting to face Michael van Gerwen this evening
LAWRENCE LUSTIG/PDC
1 of 1
By Henry Hardwicke UPDATED 5:46PM, JUL 22 2020

Simon Whitlock upset a potential big-hitting Betfred World Matchplay quarter-final between Michael van Gerwen and Gary Anderson but the Flying Scotsman is unlikely to be disappointed by that and he can steam into the last four.

Whitlock was a 7-1 shot to get past MVG but that didn't stop the Aussie hammering Mighty Mike 11-4 to set up a showdown with Anderson.

The Wizard deserved credit for taking his chances against an out-of-sorts Van Gerwen but he was afforded plenty of them and that might not be the case against Anderson.

The Flying Scotsman averaged just less than 93 in his 11-8 win over James Wade in round two, and while that will need to be improved upon, he hit nine 180s along the way and that suggests the scoring power is there.

Anderson can be backed at a shade of odds-on giving Whitlock a 2.5-leg start and that looks a great bet.

Michael Smith was let off the hook by Mensur Suljovic in the previous round but Krzysztof Ratajski could be more ruthless.

Ratajski's averages in this event and the Pro Tour are better than Bully Boy's and there was a lot to like about a 12-10 win over the big-scoring Gabriel Clemens.

Smith has the ability to cause anyone problems when on song but his inconsistent doubling could leave him vulnerable to Ratajski.

The Polish Eagle is on the verge of rising into the top ten of the PDC rankings and he looks ready to cement his place by reaching the last four.

FIRST PUBLISHED 1:30PM, JUL 22 2020
Ratajski's averages in this event and the Pro Tour are better than Bully Boy's