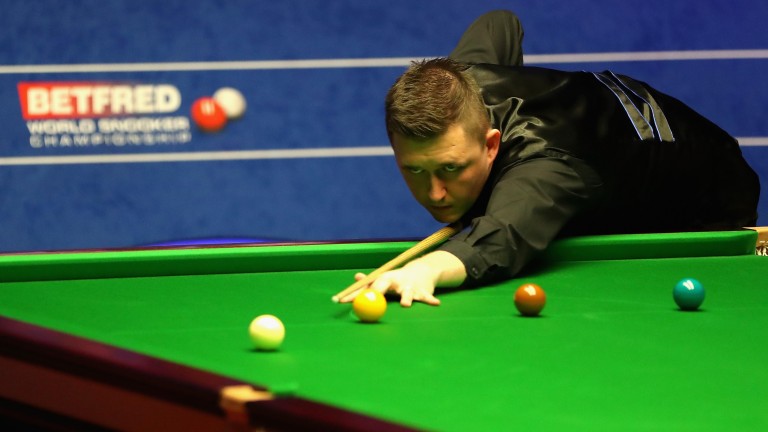 Kyren Wilson worked overtime to come through a top-quality encounter 13-11 against Barry Hawkins and there’s every chance he can extend his personal series lead over David Gilbert to 4-0 when the Midlands duo clash in the Betfred World Championship quarter-finals.

Wilson trailed Hawkins 6-1 yet still found a way to triumph. If there were any doubts about the Warrior after modifying his action, they were surely dispelled in a clash featuring nine tons, five of which came from him.

Gilbert’s threat is not taken lightly. The Tamworth ace was playing some of the best snooker in the land a couple of months ago and hammered Ding Junhui 4-0 in the Coral World Grand Prix in February with the aid of breaks of 138, 101, 74 and 66.

Victories over Joe Perry and Mark Williams mean Gilbert merits plenty of respect, but Wilson is so good, whether trailing or as a front-runner, that it’s difficult to see the outsider keeping tabs on the Kettering pro over the best of 25 frames.

Wilson is asked to successfully concede handicap starts of between 1.5 and 6.5 frames and in the hope that he makes a faster start than in his last-16 outing, that could be the way to go.

The pair’s latest clash, in the German Masters final in early February, saw Wilson win 9-7 but the Warrior is playing better now.

G Wilson v A Carter 10am

Qualifiers Gary Wilson and Ali Carter have met once before, when the Wallsend native won 6-4 in the China Open last year.

Wilson is playing arguably the most complete snooker of his career and that was rewarded with a 13-10 round-two win over three-time Crucible king Mark Selby. The Geordie outplayed the ex-world number one and barely flinched throughout.

Carter has the stouter Crucible pedigree, having lost to Ronnie O’Sullivan in two Sheffield finals, and the Captain would be a popular winner after battles with cancer and Crohn’s disease.

He is talented enough to rule the world, but it’s a concern that he has yet to post a ton in the event.

It's unlikely Wilson will fold in the way Zhou Yuelong did with the finishing line in sight against Carter – the Chinese youngster let slip a lead of 9-7 to lose 13-9.

Wilson is scoring pretty well too so Carter may need to step it up a bit to progress to the semis. But the Essex ace can be that good that punters couldn’t be confident of the outsider obliging.

Over-the-frames backers can only really get involved at 21.5 – 20.5 would have been preferred but bookmakers are tightening up their quotes – so with a close clash anticipated, it could pay to back Wilson with a start of 4.5 frames.