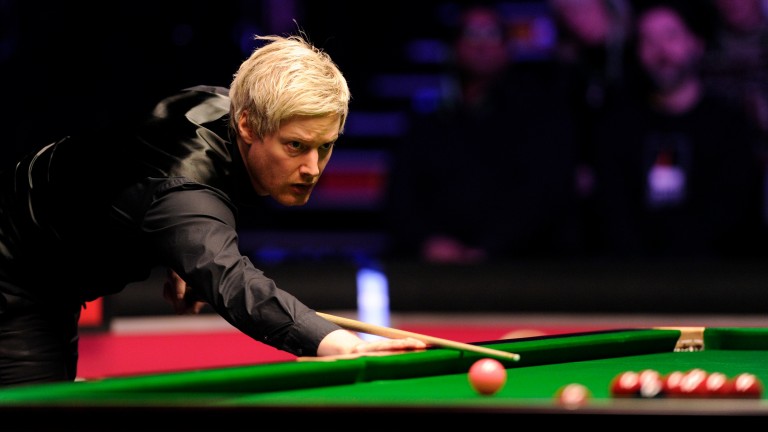 After a few days' rest Neil Robertson has a big chance to shine among the balls in his quarter-final
Alex Burstow
1 of 1
By Adrian Humphries 12:27PM, APR 30 2019

How on earth is John Higgins going to upend Neil Robertson when the Australian has had three full days' rest since nailing his Betfred World Championship quarter-final berth while the four-time Crucible king was involved in a dour, energy-sapping battle with Stuart Bingham late on Monday evening?

Given how well Robertson has been playing, there's a case for thinking the 8-15 about the Thunder from Down Under is generous. But the fact that the oddsmakers go 8-15 v 7-4 and not, say, 2-5 v 9-4 suggests they think Higgins can still be competitive against the recent China Open champion.

Shaun Murphy tried to get close to Robertson but just couldn't do so and their second-round clash ended with the Melbourne ace pulling away at the finish.

Stuart Bingham led Higgins 4-1 early on before the Wizard of Wishaw's Rolls-Royce engine started to grind into motion. Higgins did just about enough to deny Bingham, who has been in determined mood this season, but he had to put the squeeze on to edge home 13-11.

Higgins is unlikely to be able to let Robertson take a three-frame lead in the way Bingham did and the Scot will want to finish no more than two frames down after session one. A drawn first session would be a right result.

Should he keep tabs on Robertson, Higgins could start to instill doubt in his opponent's mind, which in turn could lead to errors. We've seen vulnerability from the Aussie at the Crucible in the past, perhaps most memorably when Barry Hawkins deservedly pipped him in a quarter-final classic in 2015.

But Higgins, 43, is no spring chicken and given that it is difficult to gauge the margin of success of likelier victor Robertson, the best way of punting could be to back the favourite to post more centuries.

Judd Trump is a hot favourite to see off Stephen Maguire, whom he has beaten in seven of their last eight meetings.

But considering the Glaswegian leads their personal series 14-12, won their latest clash in the German Masters earlier this year and is in pretty good nick on the baize, there could be mileage in having a handicap punt on Maguire.

We could always ask that Maguire does more to maximise his chance of capturing a world title, but so far that has not happened. However, there is not much wrong in Sheffield with the big man's game, which helped him to pip talented qualifiers Tian Pengfei and James Cahill in final-frame deciders in the opening rounds.

Trump, who showed his temperament was superior to Ding Junhui's when fighting back from 9-7 down to defeat the Chinese number one 13-9 on Monday, will obviously look to dominate the table-time against Maguire.

But the Scot is playing well enough to deny him that luxury and Maguire, who was crowned UK champion 15 years ago, is definitely good enough to outplay the Bristolian when on his game.

Maguire also looks to be managing his frustration at the table better this year and, with a lot less table-bashing going on, the Scot can be backed with a start of 5.5 frames.