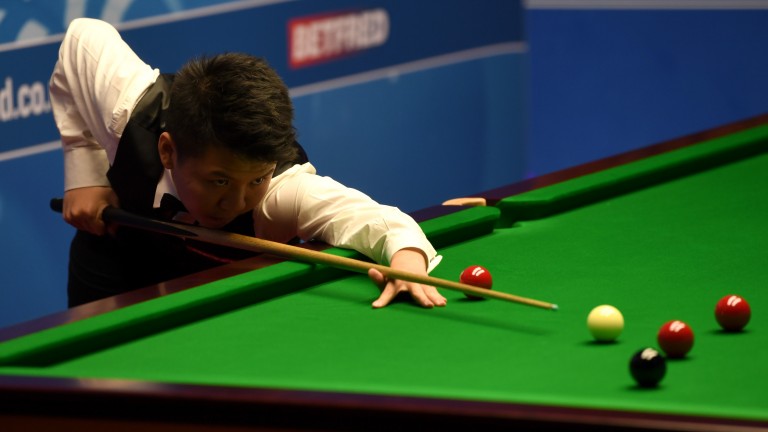 Talented Chinese youngster Zhou Yuelong looks as if he is maturing fast on the baize
Gareth Copley
1 of 1
By Adrian Humphries 8:00PM, APR 27 2019

The oddsmakers are struggling to split Barry Hawkins and Kyren Wilson in their Betfred World Championship second-round rumble, making the Warrior an ever-so-slight favourite.

Wilson didn’t look to be playing at his peak in his 10-4 victory over Scott Donaldson, while Hawkins had few problems in a 10-1 triumph over Li Hang with the Chinese player offering little opposition.

Wilson would have a definite chance to progress at his best. But after reportedly altering his cue action, he may still be in the process of trying to get things right – and any underperforming would afford Hawkins a genuine opportunity to triumph.

We should see the pair score more heavily than they did in their openers. Wilson’s highest single contribution against Donaldson was a flat 100 and he may well need to step up. But Hawkins, who peaked at 95 against Li, is seldom the most reliable of performers when it comes to scoring consistency.

Hills have taken a view on the total frames market. The best you’ll get for over 21.5 elsewhere is 4-7, which is not exactly giving it away, but Hills come to the rescue with a quote of 19-20. That strong stance also means it’s possible to get involved at over 20.5, an 8-15 shot.

So who do Hills think could run away with it? Their match-winner quote of 4-5 Wilson, evens Hawkins gives little away and is in line with other bookmakers, but at least their prices offer punters the chance to have an interest at what could be a value price.

Ali Carter v Zhou Yuelong, the last of the Crucible second-round starters, is another tough one for punters to unravel.

Carter looks the likelier victor because his temperament is as sound as they come, but it should not be forgotten that Zhou, one of the most naturally-talented players in China, did a job on Mark Allen in his opener and that achievement should not be taken lightly.

It may soon start to dawn on Zhou what he is doing in the game’s most important arena, but if he keeps his cool then he could be a threat to the Captain.

Carter leads 2-1 in their personal series, but Zhou’s two losses came courtesy of final-frame deciders and he won their most recent meeting, in last year’s Championship League, 3-0 with a break of 141.

Carter is a 5-6 chance to successfully give up a start of 2.5 frames on the handicap, but Zhou is such a prodigious talent that it’s difficult to be confident about the favourite ruling the roost.

This pair are both potentially heavy scorers so an interest in that sphere can be considered, but bookmakers have already factored in the players’ break­building prowess and bet365 go only 4-7 that three or more tons feature.

As no break bets are suitable, the best option is to return to Hills’ total-frames betting – yes, that firm are back to save us again – and take their acceptable quote for over 20.5.