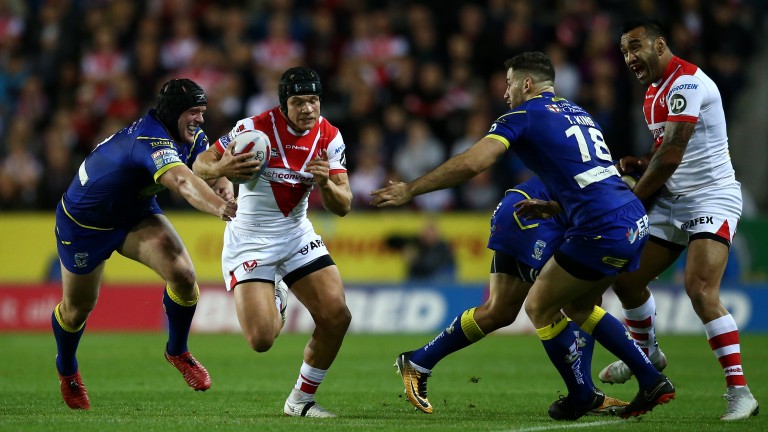 St Helens’ dominance of the 2019 rugby league season is showing no sign of stopping.

Last weekend Saints progressed to the quarter-finals of the Coral Challenge Cup at the expense of Huddersfield and now they can move six points clear at the top of the Betfred Super League by sinking Salford.

The league sponsors go 6-1 that St Helens complete a clean sweep of the three domestic trophies this term.

Justin Holbrook’s men are 1-5 to maintain this season’s 100 per cent home record. The last team to lower their colours at the Totally Wicked Stadium were Warrington in the playoff semi-final last September.

Salford are 5-1 to end the winning streak. The Red Devils have played some decent rugby this season and only St Helens and Warrington have scored more tries.

However, coach Ian Watson was critical of his team last weekend after they squandered a 16-6 lead in a Challenge Cup loss to Hull KR.

Saints are asked to concede a 16-point handicap and punters could be forgiven for being concerned about the absence of ace hooker James Roby.

However, the former Man of Steel doesn’t appear to have been missed in his three previous absences in 2019. The league leaders have won those matches by 36, 26 and 12-point margins.

In all, Saints have won four of their seven home games this year by more than the bookmakers’ handicap line and it may be best to look at the tryscorer markets for better value.

Twelve-try Regan Grace is understandably odds-on to touch down but Jonny Lomax is a more tempting bet at 6-4.

The silky stand-off has notched in eight of his 12 appearances this year and was on the mark in half of his Super League outings in 2018 so looks overpriced to add to his try tally.

In Friday’s other match, Hudders­field host Hull KR with both teams needing the points to pull away from the foot of the table.

The Giants recorded their biggest win of the season when thrashing KR 42-8 when they last met at the John Smith’s Stadium in March and are 8-15 for a repeat.

The hosts are asked to concede a six-point handicap.

FIRST PUBLISHED 8:00PM, MAY 16 2019
Stand-off Lomax has notched in eight of his 12 appearances this year and was on the mark in half of his Super League outings in 2018