Foakes and Vince can give reminder about their talent 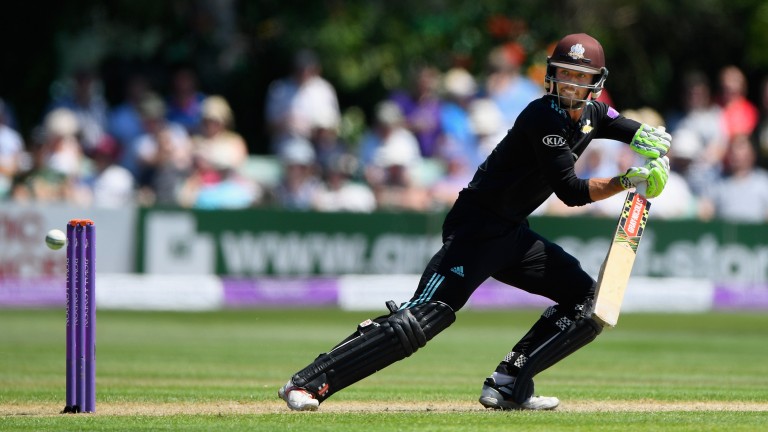 Hampshire held their nerve to claim a two-wicket victory over Sussex in their opening One-Day Cup game of the summer and they host a Surrey side bidding to bounce back from a chastening home defeat to Somerset.

With 5,000 schoolchildren in attendance at The Oval on Friday, there were few lessons in maturity and responsibility from Surrey's batsmen, who stumbled to 84-8 before some tail-end resistance hauled them to 129 all out.

Somerset knocked off their target with almost 30 of their 50 overs remaining, leaving Surrey needing a positive response on their awkward trip to Hampshire.

Light showers are forecast but a good day-night contest is in prospect, with most bookmakers unable to split the teams.

It may pay to support two members of England's Ashes tour party, both of whom have been overlooked for this week's first Test against Pakistan at Lord's.

Jonny Bairstow and Jos Buttler are formidable obstacles in the path of Ben Foakes's international ambitions but Surrey's wicketkeeper-batsman has been a superb performer at county level for the past couple of seasons.

Foakes has looked in fluent touch this season, making 46 and 81 against Hampshire in his first County Championship game of 2018, and he is a nice price to top-score for the visitors.

James Vince was a more high-profile omission from England's Test squad, especially given his unbeaten 201 against Somerset at Taunton last week.

He fell cheaply at Hove on Saturday, when Gareth Berg (65) top-scored for Hampshire from number eight, but he was outstanding in this competition last season.

Vince's seven knocks in the South Group yielded 463 runs with three fifties and 178, a Hampshire 50-over record, against Glamorgan at the Rose Bowl. The skipper could give television viewers a reminder of his quality against Surrey.