Bell will be key if Steelers are to cause an upset

Pittsburgh can provide plenty of problems 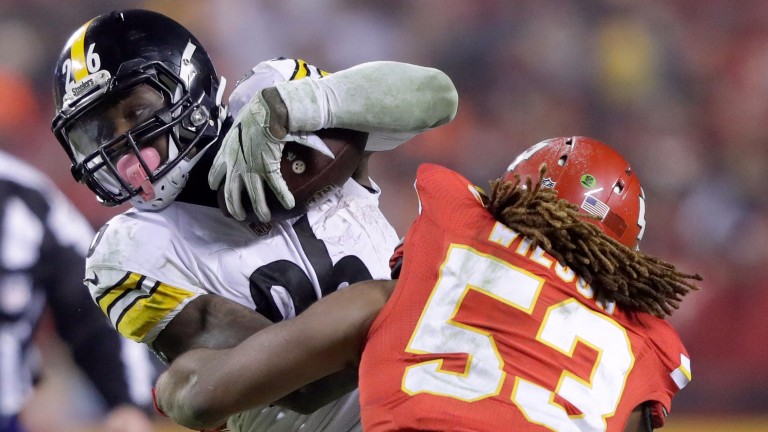 No one could accuse Pittsburgh and New England of having limped into the playoffs, but with the Steelers having won their last nine matches and Patriots their last eight, something has to give at Gillette Stadium.

New England's progress to the AFC Championship game has been serene but there may be a grain of concern that quarterback Tom Brady threw two interceptions in their 34-16 win over Houston last week.

They did not matter ultimately, but against a team whose offence is at the opposite end of the ability spectrum, there will not be any room for complacency.

If Pittsburgh are to upset the AFC's number one seeds in their own backyard, they will need a big performance from running back Le'Veon Bell.

He is capable of stepping up to the big occasion after inspirational playoff performances against Miami and Kansas City, even if he is lining up against the third-strongest rushing defence in the league.

Brady has won nine of his last 11 matches against the Steelers, but the last one, a 27-16 success in Week Seven was against a Pittsburgh side without quarterback Ben Roethlisberger, so a better showing from the opposition is expected.

The Steelers should not be fearful taking on the Patriots, even if their average of 15.6 points per game was the lowest in the regular season.

Antonio Brown also provides a great receiving outlet for Roethlisberger and the Patriots will have to be at the top of their game to claim their place in the Super Bowl on February 5.

Bill Belichick is a legendary coach and he and Brady have won 16 of the 19 playoff games they have directed at Gillette Field.

So it could be that they just hold the edge, but the Steelers are capable of staying at least within the six-point handicap.