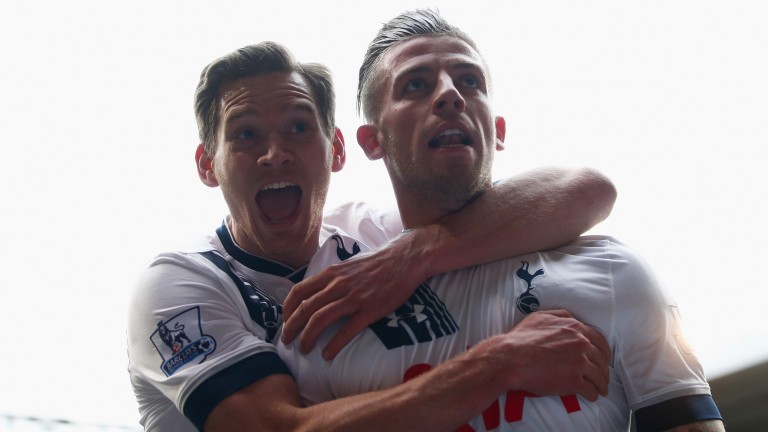 Toby Alderweireld and Jan Vertonghen are a formidable combination in the Tottenham defence
Julian Finney
1 of 1
By Dan Sait 4:22PM, MAR 5 2017

This clash is billed as Harry Kane versus Romelu Lukaku, but it could be in defence where the match is won.

Lukaku is capable of bullying opposition back lines into submission, with his pace and power overpowering the majority of defences. However, it is interesting that the Belgian hasn't scored in any of the eight matches in which he has faced his fellow countrymen Jan Vertonghen or Toby Alderweireld - bar in the wrong net against Alderweireld's Southampton in 2014.

The excellence of Tottenham's defensive duo does, of course, play a major part in their shackling of Lukaku, but they have the added advantage of learning methods of halting the giant attacker while practising together on international duty. Tottenham manager Mauricio Pochettino will therefore be doubly keen that both Alderweireld and Vertonghen are able to shake off injuries picked up last weekend. The former looks the more likely to miss out and if he does, Lukaku will scent blood. Whether Pochettino makes a straight swap with Kevin Wimmer or switches to a back four, neither alternative has looked anywhere near as convincing for Spurs this season.

At the other end, Kane does his damage through intelligent movement and his clinical eye for goal. The England striker cannot dominate opponents in the same physical fashion as his opposite number, but his clever forward runs and sometimes underappreciated link-up play drag opposing defences out of shape, opening up chances for his fellow attackers to exploit.

Like Lukaku, however, Kane cannot expect to have things all his own way. Everton have proved tough opponents for Tottenham in recent seasons, drawing the last three meetings and losing only three of the previous ten head-to-heads, each time by just a single goal.

The presence of Ronald Koeman in the dugout should only improve the Toffees' resilience. The Dutchman came in for undue criticism early on during his Goodison Park tenure, but the team was always going to need time to adapt to Koeman's methods and a changing of the guard in central defence.

Slowly but surely things are taking shape for Everton, and Kane and Co now find themselves facing a well-drilled back four protected by a midfield three bursting with energy. Morgan Schneiderlin, Idrissa Gueye and impressive youngster Tom Davies act as an effective shield in front of their defence, each happy to do the dirty work as they disrupt and harry their opponents into mistakes.

Everton's shape may still remain a work in progress, with both their best and worst results of the season - a 4-0 thrashing of Manchester City and a 5-0 hammering by Chelsea - coming while Koeman experimented with a three-man defence similar to that preferred by Pochettino. But a run of five consecutive away games without defeat for the Toffees suggest the visitors won't be willing to play the role of whipping boys at White Hart Lane.

Dan Sait is the Football Editor of the Racing & Football Outlook, out every Tuesday