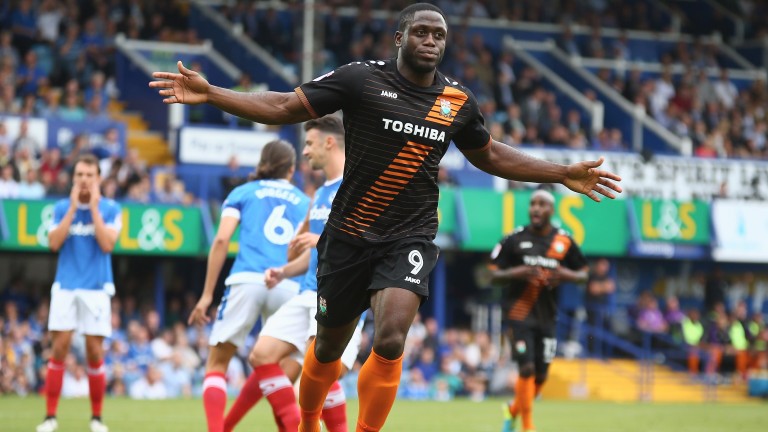 Barnet v Newport
Barnet are the only team in the top half of Sky Bet League Two who don't have a positive goal difference but that should change after Newport have visited the Hive.

The Bees dropped down to ninth after last week's stinging defeat at the hands of leaders Doncaster, although there are still many pluses to take from a season that sees them outperforming pre-season expectations.

Donny may well turn out to be the champions so there is no disgrace in losing 3-1 to them and Barnet are taking a serious step down in grade when rock-bottom Newport head to north London.

The management team of Rossi Eames and Harry Newman seem to have steadied the club following the departure of manager Martin Allen and their new pressing approach is unsettling opponents.

That was evident last week when Donny were panicked into a sloppy back-pass that saw Barnet's star striker John Akinde notch his 18th goal of the campaign, although the extra class of Rovers took the match away from the Bees.

Barnet have won six of their last nine matches, a run which includes a couple of victories over second-placed Plymouth, and it will be interesting to see how Newport cope with the high-energy hosts.

Visiting boss Graham Westley has been busy bringing in a number of experienced pros to help with Newport's relegation dogfight and they battled well in last week's 1-1 draw at home to Colchester on a boggy pitch the outspoken boss admitted was a "disgrace."

Westley's argument is that young players can't play on such a surface so it was important to bring back older heads who knew how to handle the situation.

Newport have taken one point from the last 27 available so something needed to change, but odds-against about Barnet is fair enough.

Doncaster v Crewe
Doncaster are looking to make sure their drop down to League Two is only brief and the leaders should have no trouble overcoming the threat of Crewe at the Keepmoat Stadium.

Rovers are four points clear of the chasing pack and are beginning to kick on with nine wins in their last 11 league matches, while seven of the last eight at home have finished in victories.

Darren Ferguson's diamond formation has seen them score 52 goals in 26 League Two outings and that adventure is often the best policy when you possess one of the strongest sides in the division.

It was the same story at Peterborough when Ferguson's men bulldozed their way up the divisions. Eventually, teams reach a level where more is needed tactically but that should not be the case against a Crewe side in serious danger of relegation.

Alex have suffered defeat in six of their last eight league games and Steve Davis was replaced as manager by David Artell, who immediately dropped Davis's son, Harry, from the squad for last week's 2-1 loss to ten-man Luton.

Crewe's local newspaper was upbeat after the defeat, citing a much-improved performance, but despite having ten men for nearly the whole of the second half Luton won the shots-on-target count 8-1.

There does not appear to be a great amount of resilience in the ranks which spells trouble against the likes of James Coppinger, Liam Mandeville, John Marquis, Tommy Rowe and Andy Williams.

Exeter v Colchester
This is a crunch clash between two rapid improvers with their eyes firmly set on challenging for the playoffs and hosts Exeter make much more appeal.

The prices would suggest home advantage means nothing to Exeter and it's true the Grecians have collected only eight points at home this term compared to 28 on the road.

However, these anomalies tend to revert to something nearer the norm over time and we are already seeing evidence of that with Exeter winning their last two home matches by an aggregate 6-0.

That makes it six wins in eight overall and Colchester's nine-match unbeaten run will be put under firm examination.

Banker
Bayer Leverkusen 8-11
The table says Leverkusen are only the ninth-best team in the Bundesliga this season but they have underachieved, sometimes through bad fortune and other times through their own stupidity. The winter break came at a good time and they can beat a Hertha side who are punching above their weight this season.

Blowout
Norwich 11-10
The Canaries are not at full strength and Wolves arrive at Carrow Road brimming with confidence after wins over Stoke and Aston Villa and a draw at Sheffield Wednesday.

Hotshot
Andre Schurrle 13-2 bet365
There's a mini-crisis for Dortmund up front after Adrian Ramos was sold and Pierre-Emerick Aubameyang is away at the Africa Cup of Nations. Andre Schurrle is rumoured to be in prime position to start in attack at Werder Bremen today.

Marco van Basten was one of the world's greatest strikers but he seems to be on a mission to ruin football in his role as chief technical development officer at Fifa.

Anyone with a job title like that needs to come up with innovations otherwise you would just talk yourself out of a position but Van Basten, one of the voices behind the ludicrous idea of a 48-team World Cup, is not just enjoying the Fifa gravy train, he is driving it.

Among his plans this week were to suppress the offside rule, introduce sin-bins, get rid of extra-time and split 90 minutes into four quarters.

No offsides would encourage teams to hoof the ball forwards towards goal-hangers; sin bins would only encourage the team with fewer men to waste time for the minutes they were at a disadvantage by running the ball into the corners etc; and going straight to a penalty shootout further encourages the underdogs to play for a draw.

Splitting the game into quarters would allow an extra advert for TV companies but do little to help the flow of a game and I'm not far away from starting a campaign to bring back Sepp Blatter ...