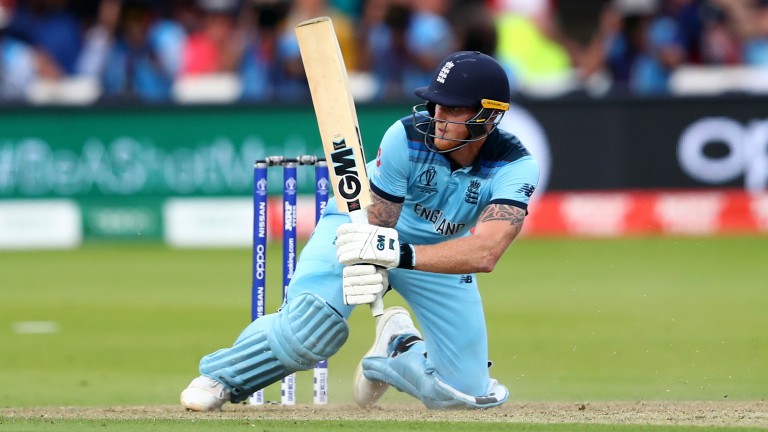 Ben Stokes is 7-4 for Sports Personality of the Year after his World Cup final heroics
Michael Steele
1 of 1
By James Milton UPDATED 3:17PM, JUL 15 2019

England's stunning victory over New Zealand in the Cricket World Cup final at Lord's will take some time to sink in and there could be more glory to come for the nation's cricketers in 2019.

England thrashed Australia in the World Cup semi-final and they are no bigger than 5-6 to regain the Ashes by winning the five-Test series against the Aussies which starts on August 1.

And Ben Stokes, man of the match in Sunday's final at odds of 16-1, has been slashed from 28-1 to just 7-4 to be named BBC Sports Personality of the Year.

Lewis Hamilton, who had a memorable Sunday of his own, winning the British Grand Prix for a record-breaking sixth time, is next in the betting at 7-1 with footballer Raheem Sterling 11-1 and athlete Dina Asher-Smith 12-1.

Betway make England 4-6 to win team of the year at the Sports Personality ceremony. Champions League winners Liverpool are seen as their main rivals at 7-4.

Joe Root catches the eye at 20-1. The batsman was England's leading runscorer at the tournament and could enhance his SPOTY credentials as Test captain in an eagerly-anticipated Ashes series.

Stokes, of course, could also play a starring role in the Ashes and punters clearly believe his role in an unforgettable World Cup final makes him a strong favourite for the BBC award at this stage.

The Durham all-rounder had been 9-1 to top-score for England at Lord's and his unbeaten 84 mixed moments of brilliance with slices of enormous good fortune.

Having hit 15 runs off the final over to tie the game, Stokes then batted for England in the Super Over which also finished in a tie.

England, 2-1 ante-post favourites, beat 11-1 New Zealand only by virtue of hitting more boundaries in the match and they had drifted to 10-1 in-play.

England's Test players will be back in action on July 24 for a one-off match against Ireland at Lord's before the first Ashes Test starts at Edgbaston a week later. Betfair make England evens to win the first Test with Australia 8-5 and the draw 9-2.