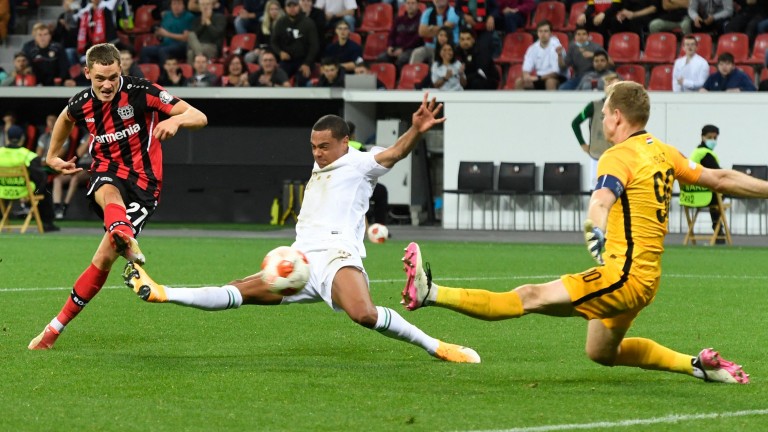 Bayer Leverkusen
Midfielders Julian Baumgartlinger and Charles Aranguiz plus defenders Mitchel Bakker and Timothy Fosu-Mensah are among the players sidelined for Leverkusen, while Patrik Schick is a doubt. Kerem Demirbay misses out through suspension.

Celtic
The Scottish Premiership side will be without Christopher Jullien, Carl Starfelt, Tom Rogic, Karamoko Dembele and Greg Taylor.

Celtic have enjoyed a turnaround in fortunes domestically and on the continent in the last few weeks but an away trip to Bayer Leverkusen represents their greatest challenge yet under Ange Postecoglou.

Wins over Aberdeen, Motherwell, St Johnstone, Hibernian and Dundee since the beginning of October have seen the club move back into title contention in the Scottish Premiership.

And in the Europa League they are fresh from successive wins over Ferencvaros.

But Leverkusen are top of Group G with three wins and a draw from four matches, scoring 11 times and conceding only twice in the process.

They are in top-four contention in the Bundesliga too and look to have the beating of Celtic, who they dismantled 4-0 in Glasgow in September.

Nonetheless, Celtic know they need to attack this contest as a stalemate would mean they will probably still need to beat Real Betis on the final matchday and that could point to goals.

Patrik Schick's involvement in this game looks in doubt but in Florian Wirtz, Leverkusen have a special attacking talent and they will also be keen to secure top spot with a win.

Six of the German outfit's last ten fixtures in all competitions have featured over 2.5 goals while Celtic have seen 12 goals in their last three games.

Die Werkself are certainly the team to side with and they are worth backing to win in a match involving at least three goals.