Battling England can stop All Blacks running away with it 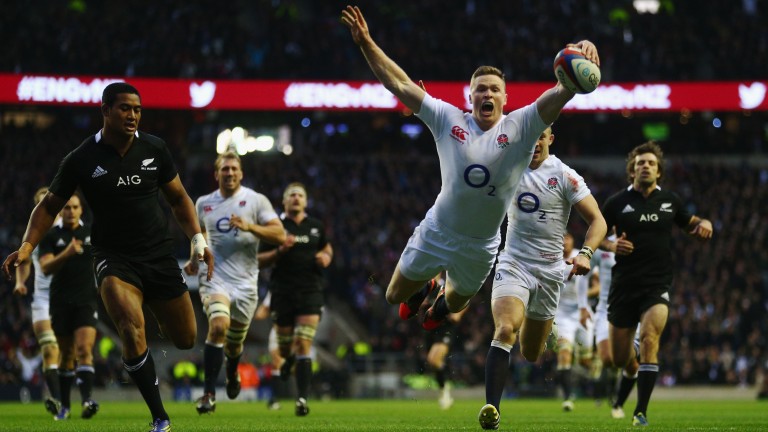 Since England’s World Cup victory in 2003 perhaps their finest moment has been their Twickenham victory over New Zealand in 2012, and what a fillip it would be to Eddie Jones’s men if they could repeat that feat a year out from the Rugby World Cup.

They’ve lost five in a row against the All Blacks since that day, and bookmakers don’t see that changing as they hand England a 14-point start against the back-to-back World Cup winners.

But four of those five defeats have been by a single-figure margin and unlike other sides at the top of the world rankings, England have shown they can stop New Zealand doing what they do best - score tries - and scores could again be close in this biggest test of all for England.

The World Cup-winning formula for England in 2003 was a dominant pack, outstanding defence and clinical goal-kicking, and South Africa didn’t deviate far from that four years later when they beat England in the final.

But in this decade the All Blacks have redefined the world game and their winning recipe has been all about scoring tries.

Since the drawn series with the Lions in 2017 the All Blacks have won 19 of 21 Tests, by an average score of 39-20, scoring six tries to two. Only once have they failed to score at least three tries - in their 2017 defeat to Australia.

In 2018 New Zealand have scored at least four tries in every one of their 11 Tests (ten wins and one defeat). In their only loss (to South Africa) they still outscored their opponents by six to five.

But if there is one team who can stop New Zealand cutting loose and scoring tries at will, history suggests it’s England, and the stats are backed up by last week’s battling defensive performance against South Africa. And England have conceded more than three tries to New Zealand in only one of their last nine meetings.

When Eddie Jones took over as England coach he made it clear he was prioritising defence and set-piece, even saying that he would be happy to wait until next summer and the eve of the World Cup, to get his defence in order and that emphasis has been reflected in performances.

Only once in 58 matches over the last ten years have England conceded more than three tries at Twickenham. That was the crazy 2015 Six Nations decider against France which ended 55-33.

It won’t just be a tin-hats approach from England. Jones has made something of a statement by bringing in winger Chris Ashton, who scored a try in that 2012 victory, along with Jonny May, who bagged the opener after just three minutes in the most recent meeting.

That was four years ago, and given the length of time since that encounter and how close we are to the World Cup, this has become a defining fixture for Jones and England. They will throw everything at it, and although it’s unlikely to be enough to overcome a New Zealand side who have already come through their wake-up call of the year in the form of a home defeat to South Africa, they have shown they know how to put up a fight.