Battle at the bottom: Who will be relegated from the Premier League?

Liam Flin looks at the main contenders fighting for survival 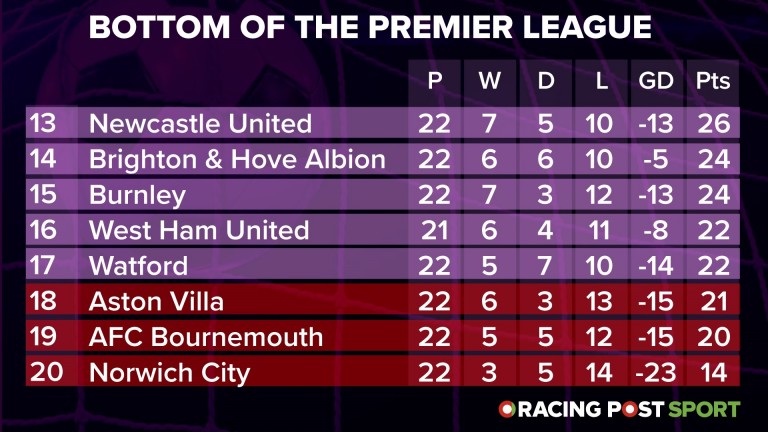 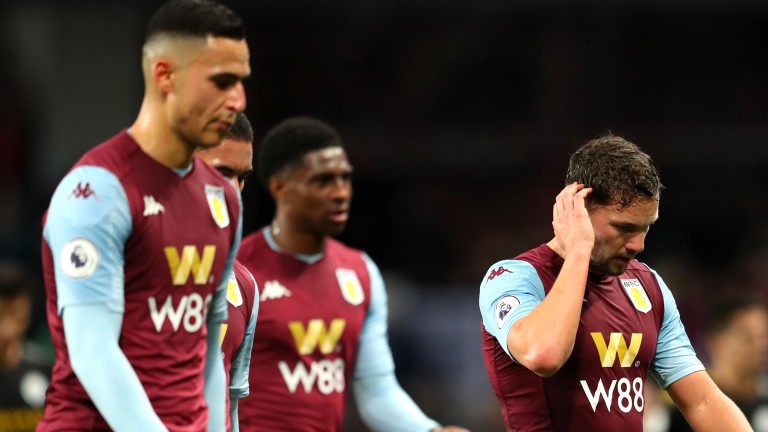 The Premier League is set for one of the fiercest relegation scraps we have seen. As short as 1-20 for the drop and eight points from safety, Norwich look down and out but which other two clubs could join the struggling Canaries in the Sky Bet Championship next term?

Liam Flin assesses the top-flight clubs fighting for survival and their chances of staying up...

Teemu Pukki, absent for the Old Trafford mauling, has stopped scoring and Norwich are leaking goals. They look unlikely to pull off the great escape and should already be preparing for life back in the Championship.

Every fairytale has its villain and the antagonist in Bournemouth’s Cinderella story has been a lengthy list of injuries.

Under the darling of Dorset Eddie Howe they have established themselves as Premier League mainstays but after only one win in 11 league games, things are turning sour for the Cherries.

Key players such as Nathan Ake, Josh King, Charlie Daniels, Steve Cook and Adam Smith have spent time on the sidelines and they could lack the resources to properly recruit in January.

The club are in free fall, having been leaky at the back and lacking the creativity of long-term absentee David Brooks.

Despite wins over Chelsea and Manchester United, they have struggled against the lesser lights and that does not bode well for a side who face relegation rivals in their next three assignments.

A misfiring, multi-million-pound marksman in Wesley and plenty of catastrophic defending has not made for a good combination at Villa Park this season.

Aston Villa's midfield featuring Brummie hero Jack Grealish and composed figures Conor Hourihane and John McGinn has been their strength. They are correctly focusing attention on acquiring a forward this window with Wesley out for the season and the right player could propel them out of trouble.

But they seem to be targeting the likes of Islam Slimani and Christian Benteke, who are big risks given their history in the Premier League, and if they remove Dean Smith from his post that could be the final nail in the coffin.

Watford are heading in the right direction as they aim to secure Premier League football for another season.

The arrival of Nigel Pearson and return from injury of Troy Deeney has done wonders for their attacking play with Ismaila Sarr and Gerard Deulofeu hitting purple patches to help the Hornets to four wins and a draw in their last five league games.

This is a squad which finished 11th last term and reached the FA Cup final and, although the old adage of 'too good to go down' has proved flimsy time and time again, Watford, energised by their third manager of the campaign, have the players to show the early-season troubles were not the norm.

David Moyes received a reality check when losing for the first time as West Ham boss against Sheffield United and the Hammers cannot be ruled out of this relegation battle.

The signing of reported target Marouane Fellaini would be lazy and they would be better-placed focusing their attention in the transfer market on a forward to ease the pressure on Sebastien Haller.

Only Norwich (nine) have taken fewer points from home games than West Ham's ten this season and making the London Stadium a tough venue to visit should be their priority.

Burnley must tend to the attrition of their defensive strength if they are to pull away from the drop zone.

The rearguard solidity associated with Sean Dyche's Burnley has evaporated in recent weeks but the reliable Chris Wood always gives them a chance, especially at Turf Moor, where five of their seven Premier League wins have come this season.

The Clarets are rarely in the headlines for their transfer business but the rumoured move for Aberdeen centre-back Scott McKenna could be a shrewd one as they aim to solidify their top-flight status.

Brighton have been generally impressive under Graham Potter. The caveat that comes with his brand of attacking football, however, is more goals being conceded.

The Seagulls had a tough festive period which dragged them into the lower echelons of the table but the ability of Neal Maupay and Leandro Trossard coupled with Lewis Dunk's battling qualities gives the team excellent balance.

They should be favoured to take points off their relegation rivals in the coming weeks.

Steve Bruce's arrival on Tyneside was met with cynicism from many of the Newcastle faithful but if he leads the Magpies - who were 9-4 ante-post for the drop - to safety, those opinions may change.

A disciplined back five and sprinkling of individual flair, most recently from Paraguayan playmaker Miguel Almiron, has helped them to seven league successes this term.

Joelinton has not found the net since his only goal in a Newcastle shirt on August 25 so adding firepower should help to ensure they do survive.