Bath can hang on to Leicester Tigers' tails at Twickenham

Glasgow Warriors should make Scarlets work for a success 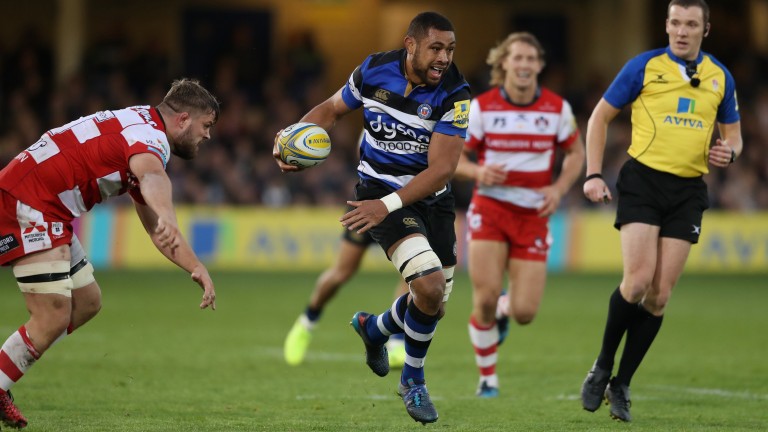 Taulupe Faletau breaks with the ball for Bath against Gloucester
Getty Images
1 of 1
By Max Oram 8:03PM, APR 6 2018

Leicester's Premiership playoff push is picking up steam with five wins in six while Bath's bid has fizzled out tamely. However, the West Country outfit with a start of three appeal as the bet in the game billed as The Clash at Twickenham.

There was a similar form scenario before last year's showdown between English club rugby's traditional powerhouses and Bath ran out 27-21 winners.

They also turned over the Tigers 27-23 at Welford Road in the first round of matches and head coach Todd Blackadder will be reminding his charges that they can still claim a top-six berth and a place in the Champions Cup next season.

This is a refreshed Bath team from the one that lost last weekend's rearranged Anglo-Welsh Cup final to Exeter and more like the one that pushed the table-topping Chiefs hard at the Rec a fortnight ago and prevailed over Leicester in September.

Internationals Jonathan Joseph and Ben Tapuai bolster the midfield, Kahn Fotuali'i and Rhys Priestland are at the half-back controls and Francois Louw and Taulupe Faletau slot into the back row. Plenty in the wider squad have good memories of beating Leicester handily at the Rec in 2016 and twice sensationally in 2014-15.

George Ford was Bath's fly-half for the four wins before his summer return to Leicester and he guided the Tigers to a ground-out 16-15 home win over Wasps two weeks ago.

However, Wasps were weakened foes and if wing Nick Malouf had been red-carded rather than sin-binned for his high tackle on Christian Wade in the 20th minute, the outcome would probably have been different. The Tigers need to cope without sidelined key presences Manu Tuilagi, Ben Youngs, Mike Williams and Brendon O'Connor and the now banned Malouf.

A strong Saracens side are bidding to put 50 points on Northampton for a fourth time this season while Newcastle are out to maintain their playoff push at Worcester. Sarries give up ten points to the Saints at Franklin's Gardens and the Falcons three to their hosts the Warriors.

Glasgow with a start of four points from Scarlets is the wager in the headline Pro14 clash.

The Conference A-topping Warriors have not always hit the heights of their ten-game winning start to their league campaign in recent months but supreme Kiwi coach Dave Rennie should have them focused again after the depletions and distractions of the Six Nations. Stuart Hogg and Tommy Seymour are among six Scotland internationals who return to the Glasgow ranks.

The Scarlets were involved in a high-intensity home Champions Cup quarter-final battle with La Rochelle last weekend and while the current Pro12 kings will be buzzing over that triumph and want a home playoff game, their stars have been playing a lot of pressure rugby recently and their back-ups have not always excelled. Scarlets have won only two of their last eight games in all competitions.

Leinster against Zebre (TG4, 2pm) and Cheetahs versus Cardiff (S4C, 2pm) are also televised. Unsurprisingly, Leinster are 33-point favourites at the RDS and it should be business as usual but the Blues' Bloemfontein battle is fascinating.

Cardiff need to win if they are going to catch the Free State franchise for third spot in Conference A and their Challenge Cup quarter-final win at Edinburgh confirmed that they are in cracking form.

However, they have endured a testing trip to South Africa and bookmakers are probably right to ask the Cheetahs, who have won seven of eight at Toyota Stadium, to give up ten points.