Barney set to serve up a real spectacle 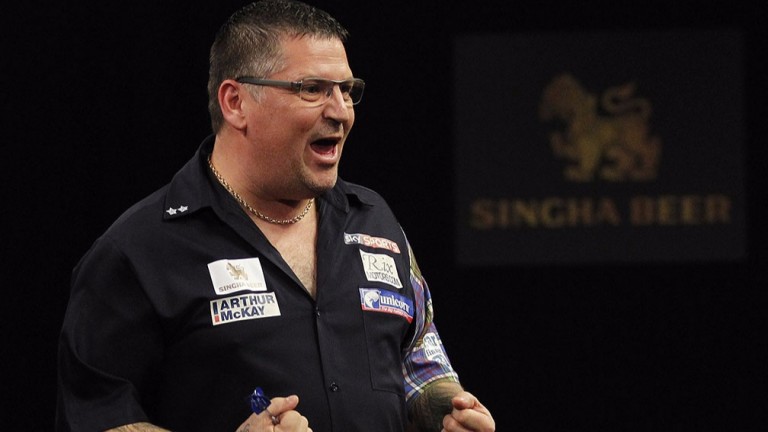 World champ Gary Anderson doesn’t look totally at ease in his new-look glasses but bookmakers can only see the Scot marching into the semi-finals of the Grand Slam in Wolverhampton.

Anderson admits he’s still getting used to his new eyewear and almost made a spectacle of himself by threatening to chuck away a 9-6 lead against Danny Noppert in the quarter-finals.

He held on to win 10-9 and he’s now a 4-9 shot against Noppert’s compatriot Raymond van Barneveld, who is playing out of his skin.

The bigger the stakes the greater the chance of Anderson showing his class, but he warns: “I think my throw is slightly different, maybe because of the glasses. I’m working on it.”

Wade goes off 1-4 after thrashing Benito van de Pas 10-2 in the last 16, though Dobey has to be confident following wins over former world champions Adrian Lewis and Scott Mitchell.

The Northumberland flinger has also won his previous meeting against Wade, 6-5 in an Open event in April. This, though, is Wade’s domain. The big stage, the bigger stakes, bags of pressure and a long, drawn-out, best-of-31 format, suit the left-hander down to the ground.

Wade looks the winner and is worth backing at 2-1 to hit the most 180s. He hit five against Van de Pas on Thursday, just one fewer than Dobey did against Jamie Hughes in a match which went seven legs further.

Gary Anderson has won his last nine meetings with Barney – but there are grounds for giving the outsider a squeak tonight.

First, the Scot’s glasses, something he is still adjusting to, and his form since wearing them has been mixed.

And second, the form Barney is in. Three straight group wins preceded a 10-7 victory over the dangerous Glen Durrant and he’ll much prefer the rhythm of a game against Anderson with both men getting on with it.