Barcelona get it horribly wrong with Kevin-Prince Boateng deal 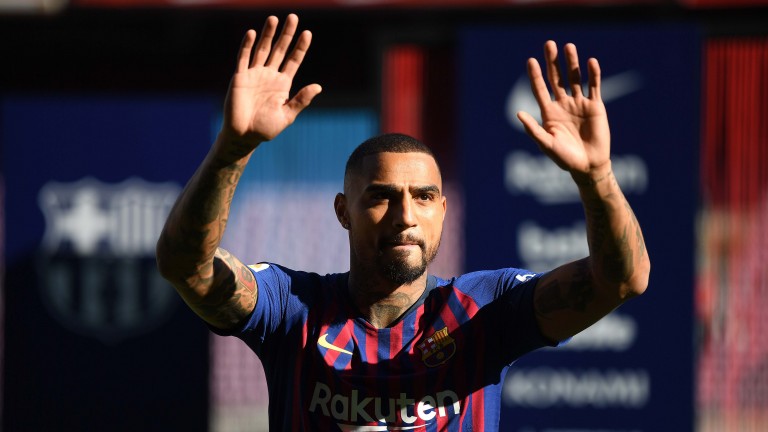 Barcelona could have done better than signing Kevin-Prince Boateng from Sassuolo
David Ramos
1 of 1
By Liam Flin UPDATED 11:11AM, JAN 24 2019

We take a look at a pick of the deals carried out in the transfer window from January 15 to January 21.

Barcelona's loan deal for Kevin-Prince Boateng ranks among the most bizarre January transfer window acquisitions of all time.

The 31-year-old brings versatility, experience and can act as cover for Luis Suarez, but this looks like a poor decision and there were certainly better options out there.

The prolific Cristhian Stuani's paltry €15 million buy-out clause is nothing for a club like Barca and the forward knows La Liga inside-out, ranking third in the top-scorer charts with 12 goals for Girona this season.

Gonzalo Higuain would have also been a more effective short-term solution than Boateng, who has operated as an attacking midfielder rather than striker for much of his career and has only 25 goals in his last six full seasons.

Former Liverpool man Ryan Babel led the way in terms of shots (three) and key passes (two) in his Fulham debut against Tottenham but the jury is still out on how the front man will perform.

The 32-year-old could act as a mentor for starlet Ryan Sessegnon and enhances Fulham's attacking depth at a tricky time for the Cottagers.

But he arrived at the club with just ten Super Lig appearances under his belt this season at Besiktas and seems more like a depth player than someone who can make a significant impact at crucial moments.

Ashley Cole is renowned as one of the greatest Premier League left-backs of all-time and could be a prominent voice in Derby's changing room.

With three Premier League titles and the 2011-12 Champions League title to his name, Cole is a proven winner and can help County's younger contingent in their push for promotion.

MK Dons' pursuit of a return to Sky Bet League One has been hampered by poor defending in recent weeks, with the club conceding in five of their last six games.

There are few concerns going forwards and so they have made the right call in focusing their transfer activity on their rearguard and veteran Russell Martin.

The 33-year-old made 278 appearances for Norwich and is composed with the ball at his feet, which could suit the possession-style approach Paul Tisdale wants his team to play.

Keeper Kiko Casilla played second fiddle to Keylor Navas at Real Madrid last season but had dropped down to third-choice following the arrival of Thibaut Courtois from Chelsea.

The 32-year-old Spaniard was understandably on the lookout for game time elsewhere and Leeds could be a great fit.

Casilla kept 15 clean sheets in his time at the Santiago Bernabeu after joining from Espanyol in 2015 and is a significant improvement on 22-year-old Bailey Peacock-Farrell in terms of leadership and experience at the back.

Only Huddersfield (13) have scored fewer than Cardiff (19) this season but Oumar Niasse is unlikely to solve their problems in front of goal.

The 28-year-old has notched just nine goals for Everton since moving to Merseyside in 2016 and made just seven appearances this campaign.

He is unlikely to fare any better in a Cardiff front line lacking star quality.