Barcelona could run riot after the break

Top tips for every group game 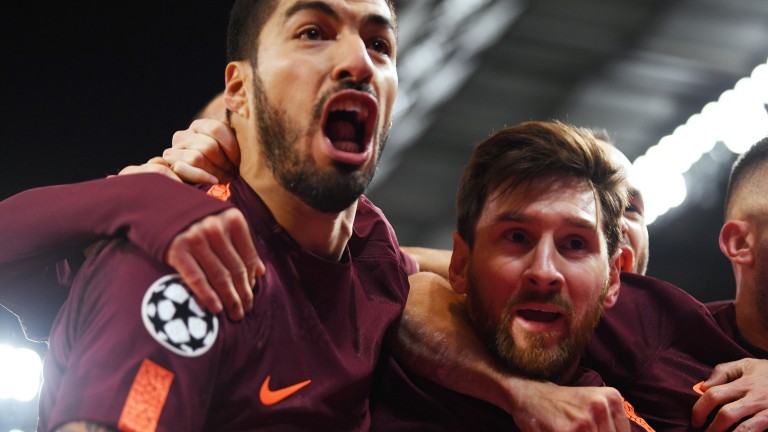 Fancy backing a bet at a shade of odds-on which has collected in 13 of Barcelona’s last 15 Champions League home matches?

Well, that is what’s on offer to those who go with the second half to have more goals than the opening period when PSV Eindhoven travel to Camp Nou on the opening night of Champions League action.

It has also landed in each of Barca’s four La Liga matches this season and most of their games tend to follow a similar pattern as inferior opponents look to keep Lionel Messi at bay before tiring due to being overworked.

Ernesto Valverde can usually call upon excellent options from the bench – Philippe Coutinho and Arturo Vidal were substitutes for Saturday’s comeback triumph at Real Sociedad – and it should be too hot for PSV.

The Dutch champions will do well to keep it respectable.

Recommendation
Second half to have more goals
1pt 19-20 Betway

Team news
Barcelona
Malcom has returned to training but may not be risked. Denis Suarez and Arthur are fit.

PSV
Ryan Thomas is a long-term absentee. Youngster Dante Rigo has not travelled.

These teams come into matchday one in shocking Champions League form – between Club Brugge and Borussia Dortmund they have gone 16 matches in Europe’s premier competition without a victory.

Something should give at the Jan Breydelstadion, with Dortmund fancied to bounce back from last year’s disappointing results against Real Madrid, Tottenham and Apoel Nicosia.

Lucien Favre’s appointment as coach is already making a difference in the Bundesliga with Dortmund beating Leipzig and Eintracht Frankfurt and drawing 0-0 away to Hannover.

The clean sheet was important after the shambles of the Peter Bosz era and Dortmund’s young centre-backs can rely on Axel Witsel to offer good protection.

Brugge have kept just two shutouts in their last 14 games.

Team news
Brugge
Kaveh Rezaei has missed training and is a major doubt.

Much has been made of the intimidating atmosphere that can be generated by Istanbul’s finest, although one victory in the last nine European fixtures suggests it is overplayed.

However, Gala won’t get many greater chances to land maximum points in the Champions League than a visit from surprise Russian champions Lokomotiv, who are desperately struggling to replicate last season’s form.

Loko are in the bottom half with nine points from seven league games, while Gala have scored 14 goals in five league outings and Eren Derdiyok can set the hosts on their way.

Derdiyok has three goals in five league games this season and also notched in the Super Kupa. The Swiss striker is likely to start up front on his own in a 4-2-3-1 formation.

Team news
Galatasaray
Maicon has returned to training but Emre Akbaba is a major doubt with Younes Belhanda on standby.

Lokomotiv
Maciej Rybus has not travelled but Brian Idowu returns.

The Champions League final will be played in Atletico’s Wanda Metropolitano stadium and they won’t want the party to take place without them.

No doubt Atletico need to improve after a poor start in La Liga, although they are more than capable of moving through the gears and can win away to Monaco.

Diego Simeone’s side, held by Eibar on Saturday, have already shown their capabilities with victory over Real Madrid in the European Super Cup.

Simeone’s side remain solid defensively and it should be only a matter of time before World Cup winner Antoine Griezmann regularly finds his goalscoring range.

Monaco have been average, picking up just one triumph in Ligue 1, and their policy of continually selling their best players, such as Atletico new boy Thomas Lemar, makes it tough to improve.

Atletico Madrid
Lucas Hernandez returns but Vitolo, Stefan Savic and Santiago Arias have not travelled. Borja Garces is in the squad.

Key stat
Thirteen of Atletico’s last 18 Champions League ties have had under 2.5 goals.

No Serbian side have ever won a Champions League match and  are unlikely to change that statistic but the former European champions can stay competitive against Napoli.

Red Star have won every one their seven league matches this season, and their comeback aggregate success over Europa League semi-finalists Salzburg in the playoff round highlights their fighting spirit is superb.

There will be a wall of noise for Napoli to contend with and Red Star have been strong at home in Europe, albeit against teams inferior to the Serie A side. They have lost just one of their last 13 European home games, conceding five goals in the process.

Napoli are still finding their feet under new boss Carlo Ancelotti and it may take the likes of Lorenzo Insigne and Marek Hamsik until the second half to find a breakthrough.

Team news
Red Star
El Fardu Ben is a minor doubt with a small injury after not being risked at the weekend.

Napoli
Keeper Alex Meret is recovering from a broken arm but has travelled to Belgrade.

Key stat
Red Star Belgrade are unbeaten in their last 30 matches in all competitions.

Each point is likely to be keenly contested in the most competitive section of the lot and this Group D opener between Schalke and Porto may finish level.

Schalke, second in last season’s Bundesliga, have lost all three of their matches in the German top flight this
term and confidence is low following Saturday’s 2-1 defeat at Gladbach.

Domenico Tedesco needs his side to get back to basics. They have lost the art of smart defending since last season and Leon Goretzka’s departure to Bayern Munich has left a huge hole to fill in midfield.

Mark Uth has been unable to bring his goalscoring form with him from Hoffenheim and fluffed a golden chance to open his Royal Blues account at the weekend.

However, Porto may not go for the kill and away from home they are likely to play with a degree of caution.