Tigers openers could cause India problems in Cardiff 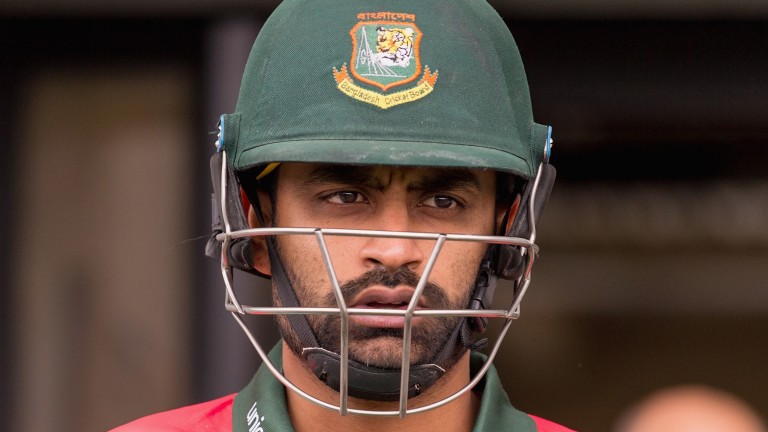 Tamim Iqbal helped Bangladesh to victory in the Tri-Series in Ireland
Kai Schwoerer
1 of 1
By James Milton 8:00PM, MAY 27 2019

Bangladesh ran India close in their last one-day meeting, a three-wicket defeat in last September’s Asia Cup final in Dubai, and the Tigers are 11-4 to defeat Virat Kohli’s men in their warm-up game in Cardiff.

India’s players have a point to prove after a disappointing display against New Zealand on Saturday. Rohit Sharma (two), Shikhar Dhawan (two) and Lokesh Rahul (six) all failed with the bat and the Kiwis comfortably chased down a target of 180.

Bangladesh were impressive winners of the recent Tri-Series in Ireland, beating the hosts once and the West Indies three times to claim the title.

Their opening batsmen are approaching the World Cup in good heart after their efforts in Ireland where Soumya Sarkar scored three consecutive fifties and Tamim Iqbal made 80 in the first win over the West Indies.

New Zealand are 8-11 to beat the Windies in Bristol in Tuesday's other warm-up game.

England eased to a nine-wicket win over Afghanistan in their final warm-up game and the World Cup favourites have received positive news on fast bowler Mark Wood’s fitness.

Jofra Archer and Joe Root took three wickets each as Afghanistan scrambled to a total of 160, having been 92-8, but England knocked off their target in just 17.3 overs as Jason Roy cracked 89 off 46 balls at The Oval.

England are 1-2 for another win at the venue when they start their campaign against South Africa on Thursday and paceman Wood should be available for selection after scans revealed that he has not suffered a serious foot injury.

Eoin Morgan (finger), Adil Rashid (shoulder) and Chris Woakes (knee) were all fit enough to play against the Afghans and are expected to make the 11 on Thursday.