Baggies can maintain their perfect start

Pulis holds the hoodoo over his former club 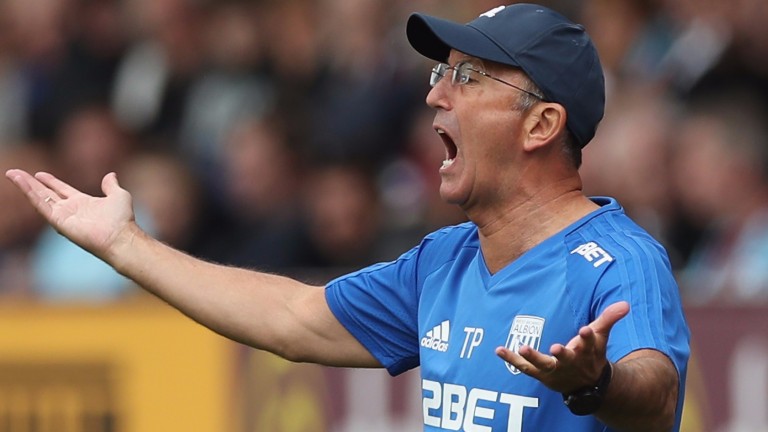 There are probably 12 teams in the Premier League who will be aiming to eclipse the 40-point mark as quickly as possible and West Brom manager Tony Pulis is the master of the art.

That's his job and he's sticking to it. Everything else seems a waste of effort.

In the last six seasons, Pulis has won just three games as manager of either the Baggies, Stoke or Crystal Palace after his team had reached 39 points.

Albion won just one of their final 12 games last season as they finished 12th with a tally of 45, and having claimed 1-0 victories over Bournemouth and Burnley, they can reach almost a quarter of their desired survival total with victory over Mark Hughes's Potters at the Hawthorns.

West Brom are efficient and it seems unrealistic to anticipate a blockbuster in Sky's early-afternoon offering, particularly as 15 of the 31 matches the Baggies have won under Pulis's stewardship have been by a 1-0 scoreline.

His summer signings have worked well so far, with defender Ahmed Hegozi slotting in comfortably in place of the injured Gareth McAuley - the Egyptian scored on his debut against the Cherries - while new striker Jay Rodriguez is off the mark having netted against Accrington in the League Cup.

Stoke is always hailed as the Premier League's most difficult place to go - particularly on Tuesday nights, for some reason - but their win over Arsenal at the bet365 Stadium last week was a massive tonic, especially as they have been slow starters in the last couple of campaigns.

It took the Potters until October 15 last year to chalk up their first win when they had the good fortune to bump into a dismal Sunderland team and it was September 26 before they claimed their first victory in 2015.

Jese's winner against the Gunners, which came a few days after his arrival on loan from Paris St-Germain, will have given them a huge lift, but Stoke have scored just three goals in their last nine away matches.

They are just not the same outfit away from their often windswept home.

It should be a different sort of test for them at the Hawthorns - the Baggies are unlikely to have the 77 per cent of possession the Gunners had last week - but Pulis should be able to maintain his fine record against his old team.

He has taken 13 points from his five matches against Stoke since taking charge at West Brom and should be well on the way to his ultimate aim after the final whistle sounds.

Team news
West Brom
Hal Robson-Kanu is suspended after his red card against Burnley. Gareth McAuley is still sidelined, Jonny Evans is doubtful but new signing Oliver Burke could be on the bench.

Stoke
The Potters will conduct a late test on Xherdan Shaqiri's hamstring injury, but Ibrahim Afellay and Julien Ngoy are still out.