Back Verstappen to make a charge through Texas field 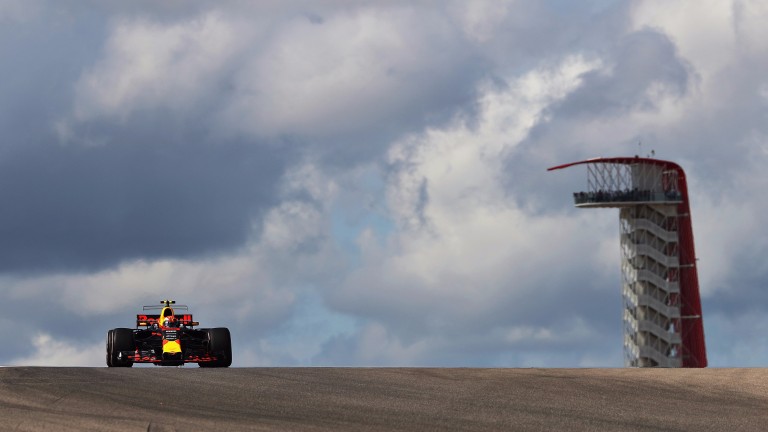 Lewis Hamilton is 8-15 to convert his US Grand Prix pole position into a ninth win of the season and fifth in sixth appearances at the Circuit of the Americas.

Sebastian Vettel did well to qualify his Ferrari second, edging out Hamiltion's teammate Valtteri Bottas to prevent a Mercedes front-row lockout and is 13-5 to secure his first win in six races.

Ferrari have shown better pace in races than qualifying on occasion this season, but Hamilton has looked in a class of his own all weekend and the Italian team's recent reliability woes make Vettel difficult to fancy.

Max Verstappen will start the US Grand Prix down in 17th place, but the Red Bull driver looks generously priced at evens to recover to the top six by the end of the race.

The Dutchman qualified sixth-fastest, but without a mistake on his fastest lap he would probably have been third quickest.

Engine-change penalties mean he takes a hefty demotion anyway, but the fresh machinery at his disposal will allow him to push harder than usual.

Verstappen started 16th in the Chinese Grand Prix early in the season but managed a podium finish, while in Italy last month his teammate Daniel Ricciardo recovered from 16th to fourth.

There is a significant performance gap between the top six cars (two each from Mercedes, Ferrari and Red Bull) and the rest of the pack and the Circuit of the Americas offers plenty of opportunities for Verstappen to make up places.

Only once this season, in China, have the 'big six' drivers filled the first six places in a grand prix. Ferrari have looked delicate mechanically in recent races so Verstappen might not need to pass cars to gain positions.

Felipe Massa finished all three practice sessions in the top eight and the Williams driver was disappointed to narrowly miss out on the top-ten shootout in qualifying.

Being eliminated in Q2 saves him a set of tyres, though, and gives more strategy options, while Verstappen's demotion means Massa will start tenth.

The Brazilian veteran has finished in the points in seven of the last eight races he has finished and looks a decent bet to increase his tally again.

Braking 14 per cent of lap (medium)

DRS zone The pits straight and before turn 12

Last year Lewis Hamilton gave his championship hopes a boost by winning in Austin for the third straight year. His Teammate Nico Rosberg was second ahead of red Bull’s Daniel Ricciardo.