Back Bronzed Adonis to dazzle 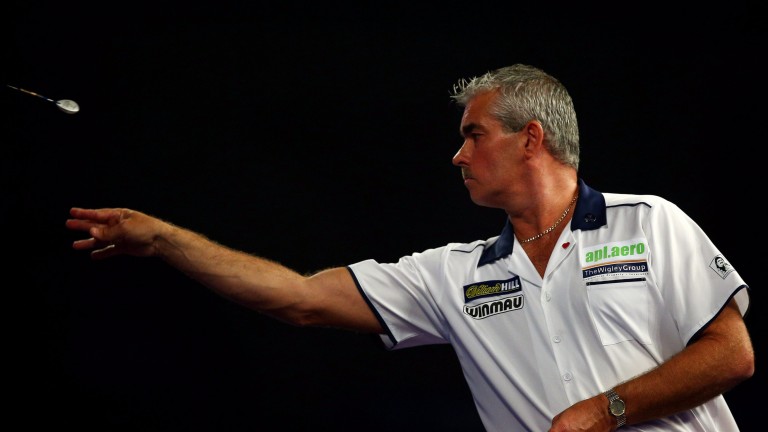 If the darting menfolk are left feeling inadequate before the dazzling eye candy gracing the William Hill World Championship stage, show the ladies what you’re made of by piling into the Steve Beaton-Gerwyn Price double.

Beaton, a former Embassy world champ who made his debut at Frimley Green in 1992, owes Devon Petersen one and since he’s probably playing better than ever, he can do the business.

Vengeance is due courtesy of a shock 3-1 loss at Petersen’s hands in the first round three years ago. It was a low-quality contest and Beaton basically flopped.

But the 52-year-old dream-maker has been chucking some fine and dandy tungsten in 2016 with a trip to the Matchplay quarter-finals the highlight.

Price takes on Jonny Clayton in an all-Welsh clash and the former Cross Keys hooker looks the classier of the two.

Price let himself down 12 months ago, chinned by rock-steady Andrew Gilding on his debut, but he has improved no end since then. Clayton’s rare TV appearances have not gone well and this could turn into an Ally Pally debut to forget.

Hendriks v Parry No previous meetings
Jerry Hendriks dines out on the 156 finish which saw off Wayne Jones on his previous appearance at Ally Pally four years ago.

Hendriks and New Zealand’s Warren Parry tee off the night-two card with a preliminary-round tussle. Peter Wright awaits the winner later on in the evening.

Hendriks never really trained on after that triumph over Woody though beating Jan Dekker and one or two other decent Euro arrowsmiths in qualifying suggests the upright Dutchman can still throw.

Parry, meanwhile, is best known for the day he beat Michael van Gerwen in a Masters event in Australia although that too seems a lifetime ago.

Hendriks is slight favourite and probably deserves to be given that Parry’s three previous appearances in the worlds have all ended at his first hurdle, although it would be no great surprise if it went the distance.