Back Ajax to hold on to their first-leg advantage 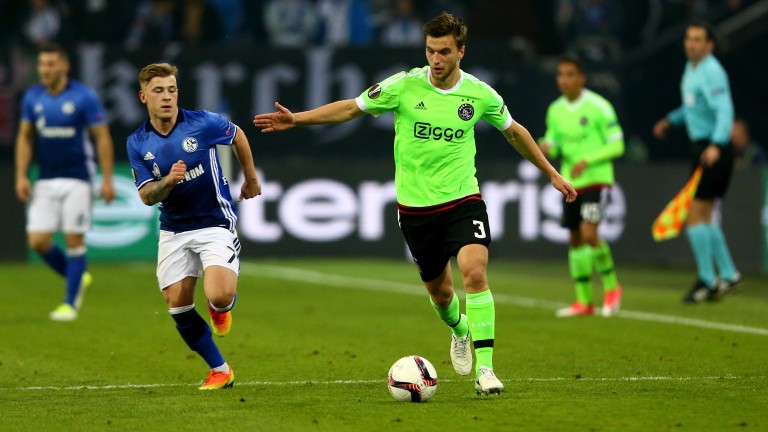 Joel Eltman of Ajax n action against Schalke in the quarter-finals
Christof Koepsel
1 of 1
By Dan Childs 7:57PM, MAY 10 2017

Ajax have not come close to winning a major European trophy since losing to Juventus on penalties in the 1996 Champions League final but Holland's most successful team can return to centre stage by advancing to the Europa League final.

The Dutch side hold a 4-1 lead over Lyon after dominating last Wednesday's semi-final first leg at the Amsterdam Arena.

Manager Peter Bosz will be looking for his team to defend diligently and his cause is helped by the return of first-choice full-backs Joel Veltman and Nick Viergever, who were suspended for last week's clash.

Ajax are likely to be tested more than they were eight days ago because Lyon's star player Alexandre Lacazette has recovered from a thigh injury.

Lacazette was introduced in the 76th minute of the first leg - Lyon were already trailing 4-1 - but was unable to make an impact.

However, having had a week for training and a 61-minute outing in Sunday's 3-2 home league win against  Nantes, he should be able to make a bigger impact.

Lacazette's link-up play with attacking midfielder Nabil Fekir has been key to Lyon's progress in the Europa League but the French side have often looked vulnerable at the back and may struggle to keep a lively Ajax side at bay.

While Lyon are unhealthily reliant on Lacazette, Ajax have an array of dangermen with Kasper Dolberg on five Europa League goals this season and Amin Younes and Bertrand Traore weighing in with four each.

Attacking midfielder Davy Klaassen has been less prolific in Europe but is a threat and showed his quality with two goals in the 3-2 loss at Schalke in the second leg of their quarter final.

They are likely to score an away goal and could advance to the final with their three-goal aggregate cushion either intact or increased.

Bet on this match soccerbase.com

Team news
Lyon
Alexandre Lacazette (thigh) was only fit enough to be involved as a late substitute in the first leg but should start this time. Emmanuel Mammana (knee) could return.

Key stat
Lyon have kept one clean sheet in their last 11 games.