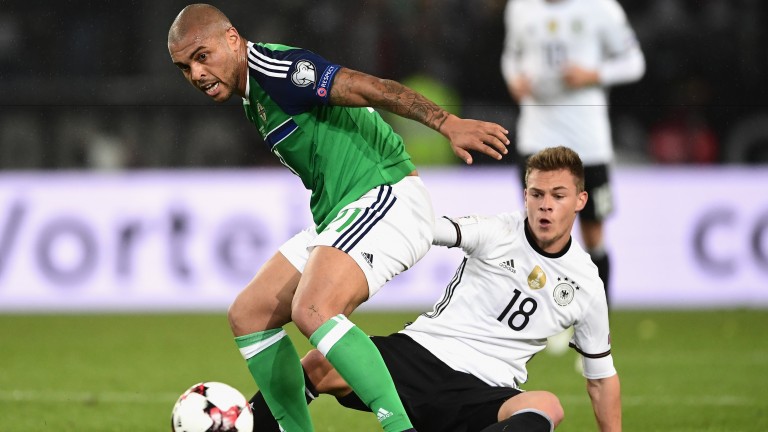 Germany are miles ahead of the competition in Group C but the battle to finish second is shaping up as an intriguing four-team tussle and two of the contenders go head-to-head in Belfast on Friday night where Northern Ireland take on Azerbaijan.

Northern Ireland conceded their first goals in the group when losing 2-0 to Germany in Hannover last month.

They were focused almost entirely on blanket defence against the world champions but will be expected to take the game to Azerbaijan, who are emerging as the surprise package in the section after taking seven points from a possible nine.

Michael O’Neill’s side are the 4-6 favourites for this clash but playing attacking football is not their natural game and the small pool of talent available to them has been reduced further by injuries to wingers Stuart Dallas and Jamie Ward, who would both have been in contention to start the game if fit.

In their last eight fixtures Northern Ireland have scored just six goals and two thirds of those came in a 4-0 victory at home to San Marino last month.

Breaking down a stubborn Azerbaijan side who have yet to concede a goal in qualifying will not be easy.

The Azeris started off their campaign with an uninspiring 1-0 victory away to San Marino but their belief has grown substantially after last month’s outings, which returned a 1-0 home victory over Norway and a 0-0 draw away in the Czech Republic.

Azerbaijan’s improvement has been orchestrated by Croatian manager Robert Prosinecki, who rose to fame as a key member of the Red Star Belgrade team which won the European Cup in 1991 and went on to play for Real Madrid and Barcelona.

Up until now, Prosinecki’s coaching career had been shaping up in far less successful style than his playing career, but he has considerably raised the standard of Azerbaijan’s performances since taking on the job in December 2014.

Notable results include 0-0 draws away to Norway and at home to Croatia during Euro 2016 qualifying, and an injury-hit Northern Ireland should be easier to contain than those two opponents. The chances of a draw look better than odds of 11-4 might suggest.

Northern Ireland
Chris Brunt is available after recovering from a long-term knee injury but Craig Cathcart (groin), Jamie Ward (wrist) and Stuart Dallas (calf) are out.

Azerbaijan
Azerbaijan have called up all the players who started last month’s 0-0 draw away to Czech Republic and could field the same side. Striker Rauf Aliyev picked up an injury while playing for Inter Baku last month and misses out.