Ayr can continue flying form with win at Stranraer 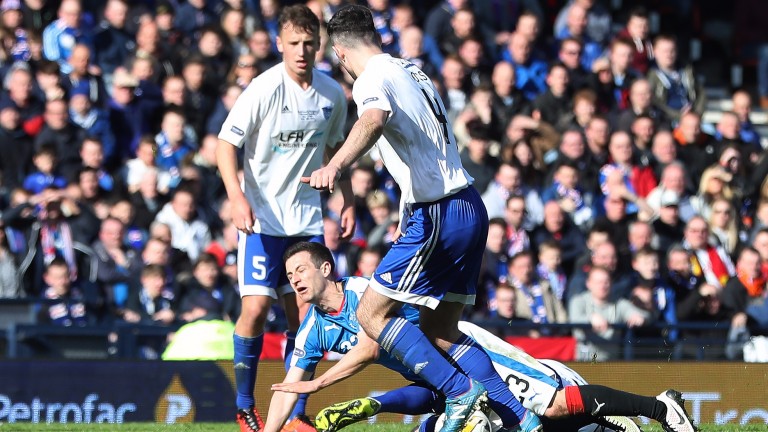 Ayr United have enjoyed a superb start to the season and there are no signs of it ending at Stranraer on Saturday.

Ian McCall's men were relegated last term, but have made a stunning start to life in Ladbrokes League One.

They have won seven out of eight games this season in three competitions and their one setback came at Easter Road against high-flying Hibs in the Betfred Cup.

United's firepower has been impressive - they've already scored 28 goals and have dished out a few beatings.

In-form striker Craig Moore has bagged eight goals for the season and has impressed at this level.

Stair Park is never the easiest of venues to dig out a result, but Stranraer have managed just one victory all season and Ayr should win in Wigtownshire.

Peterhead are another team who have started their season on fire and they can win at struggling Stenhousemuir.

Both sides were relegated last season, but the Blue Toon side have started Ladbrokes League Two in superb fashion.

They have already defeated Hearts in the Betfred Cup and have won their last five matches on the bounce.

Jim McInally's side have an abundance of experience in their ranks and in Rory McAllister, a proven goalscorer who should run amok in Scotland's fourth tier.

In contrast, all is not well at Stenny. Manager Brown Ferguson has yet to see his side win this season and a midweek nightmare Challenge Cup defeat to Highland League side Cove Rangers - at home with a full-strength team - showed the extent of their problems.

Peterhead failed to beat Stenny last season, but they can make up for it against the Ochilview side, who are also short in squad numbers.

Albion Rovers can claim the spoils in the Monklands derby against neighbours Airdrie at Cliftonhill.

Airdrie have all sorts of problems off the field and are in dire financial difficulties.

They allowed star striker Andy Ryan to join Dunfermline earlier this week and their squad is packed full of youth players.

Director of football Gordon Dalziel and coach Willie Aitchison are picking the team in the absence of a permanent manager. They are also struggling with injuries.

Albion Rovers are far from world-beaters, but they lashed five goals past Queen's Park at Hampden last week in an impressive win. They will fancy their chances of inflicting more misery on their Lanarkshire rivals.