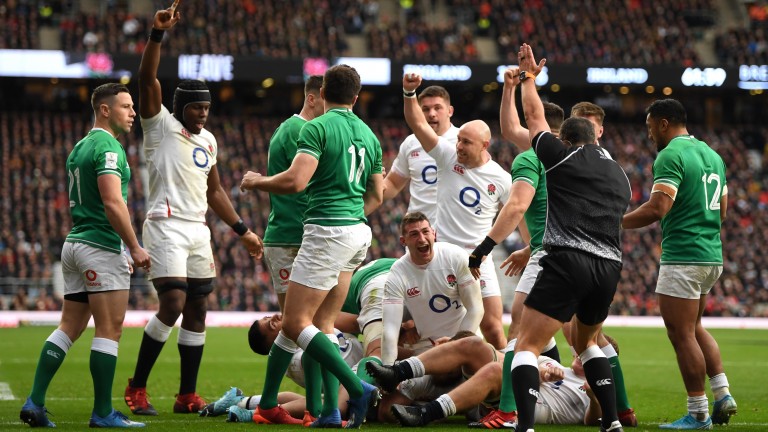 England can edge Ireland just as they did in the Six Nations in February
Shaun Botterill
1 of 1
By Graham Woods 3:53PM, NOV 20 2020

England coach Eddie Jones says he has picked "the strongest team possible for the most important game of our season," and his charges may be made to work against an unfamiliar but determined Ireland side.

Fly-half George Ford, who missed the first two games of the autumn, is fit enough to make the bench but captain Owen Farrell continues in the number ten shirt. Prop Mako Vunipola steps up from the replacements and the dynamic back three of Tom Curry, Sam Underhill and Billy Vunipola that started the Rugby World Cup final is restored.

Ireland, by contrast, are without their long-standing half-back combination of Johnny Sexton and Conor Murray. Sexton picked up an injury last week and is replaced by Ross Byrne, while coach Andy Farrell has stuck with scrum-half Jamison Gibson-Park, leaving Murray on the bench again.

Byrne was the starting fly-half when Ireland were hammered 57-15 at Twickenham in a World Cup warm-up last year but the record between the teams in competitive games underlines what an exceptional result that was.

In none of their last eight Six Nations meetings has the winning margin been more than 12 points, a mark that England hit exactly in their 24-12 success at Twickenham in February.

It was a match that England dominated and Jones has questioned whether Ireland can bring the kind of intensity they showed in their big wins over Italy and Wales in the last fortnight to Twickenham.

That is sure to bring the best out of a powerful Irish pack and they have dangerous finishers in their backline with new caps Hugo Keenan and James Lowe joining the experienced Keith Earls.

England were slow in their stride in their first match back against Italy, and although a 40-0 win over Georgia reads well they were made to toil at times and looked workmanlike.

They can be expected to step up a gear for this match and there could be plenty of fierce close-quarters combat, which could well keep the score and winning margin down.

Just one of the last 12 Six Nations meetings has produced 40 points or more - England's 32-20 upset in Dublin last year.

The handicap is bang on the 12-point margin that separated the teams in their last two Six Nations meetings, and the 2-1 about England winning by no more than that figure is an appealing price.

Wales have lost six games in a row for the first time since 2012 but that hasn't stopped head coach Wayne Pivac making 13 changes to his side to face Georgia.

Given the pressure Pivac is under to deliver he is clearly fully confident of victory but he will be aware of the first time these teams met, in Cardiff in 2017, when Wales survived a late scrummaging onslaught to win 13-6.

Pivac's predecessor Warren Gatland had also changed virtually his entire team and Wales were 18-point favourites that day - the line has been pushed up to the mid-20s for this contest.

The teams met again at last year's Rugby World Cup when Wales were more convincing 43-14 winners, just covering the 28-point line, and Pivac's confidence in ending the losing run will clearly have been boosted by seeing the Georgians lose 40-0 at Twickenham last week following a 48-7 defeat to Scotland three weeks earlier.

Among the changes to the side, there's a new half-back pairing of debutant Kieran Hardy at scrum-half with Callum Sheedy earning only his second cap at fly-half.

There's another new cap outside them, where Scarlets centre Johnny Williams wears the number 12 shirt, and if you take 65-cap Liam Williams out of the equation, the rest of the backline have ten caps between them.

That's not to say they can't turn on the kind of attacking game Pivac wants to see but they face a physical test against a Georgia team who made England work at Twickenham even if they were unable to get on the scoresheet.

The Lelos have made minimal changes to their line-up and will again look to their power game. There's more experience up front for Wales than behind the scrum but England looked to take on the Georgians in the forwards battle, with hooker Jamie George claiming a hat-trick of tries, while Pivac may want his backs to sparkle.

It could take time for the new combinations to gel and scoring may again be slow. Wales have registered only 51 first-half points in their last six matches, admittedly against far tougher opposition, but that's still less than nine points per match on average.

Whether Wales can pass the handicap mark may well depend on whether Georgia can claim some points themselves, while forecast strong winds and rain won't help either team build a score.

Six of Wales's last eight wins against tier-two nations have been by 22 or fewer points, and Georgia look worth chancing to keep the hosts at bay long enough to keep the margin down.