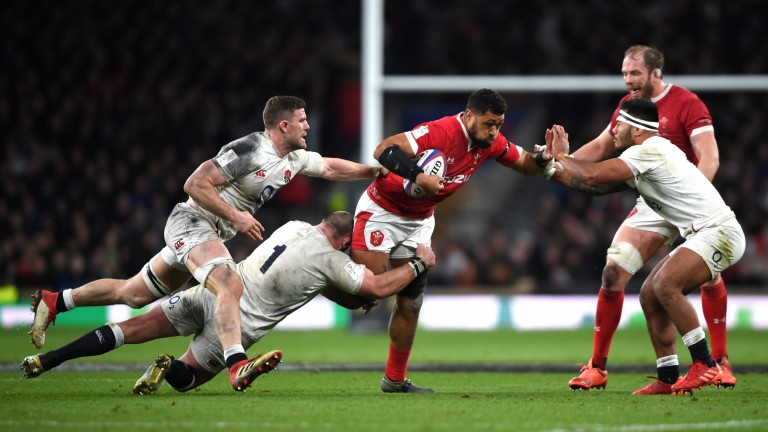 Taulupe Faletau and Alun Wyn Jones return to the Wales side
Mike Hewitt
1 of 1
By Graham Woods UPDATED 3:22PM, NOV 28 2020

It's been a year of contrasting fortunes for Wales and England, and Eddie Jones's men go to Parc y Scarlets as strong favourites to wrap up a clean sweep in their Autumn Nations Cup group games.

England started 2020 with a defeat to France then won six in a row, picking up the Six Nations title on the way. Wales opened up with a 42-0 thrashing of Italy, then lost six in a row before stopping the rot with a far from convincing 18-0 success over Georgia.

Wales have brought back some first-choice players after ringing the changes against Georgia, but also have one or two injury issues, especially in the back row as Josh Navidi and Justin Tipuric miss out, and there are some surprise selections too.

England name a strong team, with an unchanged pack from their dominant display over Ireland and George Ford fit enough to start at fly-half and push Owen Farrell to centre for the injured Ollie Lawrence.

So England are 15-point favourites, the biggest handicap they have faced on Welsh soil since the all-conquering days of Sir Clive Woodward, and the visitors will be happy to run out at an empty Parc y Scarlets rather than into the cauldron of a packed Principality Stadium.

But all Wales fans know there is something about this fixture that brings out the best in their players, that the players did that bit deeper and push themselves that bit further, and it might take something for an England side who despite their immense solidity and defensive strength have not yet caught fire in attack to win quite so convincingly.

England have held the upper hand in this fixture over recent years but the margins have usually been tight. England have not won by more than 15 points since a one-sided World Cup warm-up in 2007, and the last team to triumph by more than that margin in Wales was the World Cup-winning vintage of 2003.

England coach Eddie Jones clearly feels he has a team ready to match the feats of that generation, and conceding just 12 points in the last three matches is a pretty good blueprint for following their success.

But Wales have some old stagers back in the side who remember the 2015 Rugby World Cup victory at Twickenham, led by Alun Wyn Jones with Dan Biggar back at fly-half and Taulupe Faletau at number eight.

Liam Williams has been dropped for Leigh Halfpenny to start at full-back, and coach Wayne Pivac may be mindful of Halfpenny's defensive strength and goalkicking range. There's also a first start in four years for scrum-half Lloyd Williams, whose kick set up the winning try in the 2015 World Cup upset.

There's no doubt Wales will come under huge pressure from the England pack, particularly at the breakdown, but in their autumn games they have shipped only 14 points to Scotland and held Georgia scoreless, while England haven't always found their rhythm in attack, even against lower-ranked opponents Georgia and Italy.

They should enjoy better conditions than they did in last week's wet-weather 18-7 win over Ireland, but Wales still look the team to back to at least keep it close.

France's impressive performances this year have been in large part put down to a new consistency of selection from incoming coach Fabien Galthie, but there's a whole new look to the side that take on Italy at the Stade de France.

Just winger Teddy Thomas and fly-half Mathieu Jalibert, who came in last week for the injured Romain Ntamack, retain their places from the 15 who overcame Scotland at Murrayfield.

There are five debutants in the starting 15 while full-back Brice Dulin and flanker Sekou Macalou make their first starts for three years and scrum-half Baptiste Serin comes in to captain the side for the first time.

It's an intriguing mix but there is still the same old French power up front and flair behind the scrum, although the pace of scrum-half Antoine Dupont may be missed.

Italy have made just three changes but their chief concerns will be the lack of scoring power they've shown and the loss of flanker Jake Polledri at the breakdown, an area where he has really shown his strength this autumn.

The Azzurri have lost to nil twice this year and managed just five points in their Six Nations defeat to England last month. Their overall tally this year is 61 points in six matches, an average of ten per game.

France are asked to overcome a handicap in the mid-teens, a line they fell just short of in February's Six Nations meeting between the pair, when Italy posted their highest 2020 match total in a 35-22 defeat.

That result bucked the trend as nine of France's last 11 home victories over Italy have been by more than 15 points, but it's rarely been much more - indeed, four of the last five home Six Nations wins have been by 11 to 20 points.

Given the new look to the France side that looks a valuable pointer for a bet at a decent price.