Australian Open tennis: who will win the women's title? 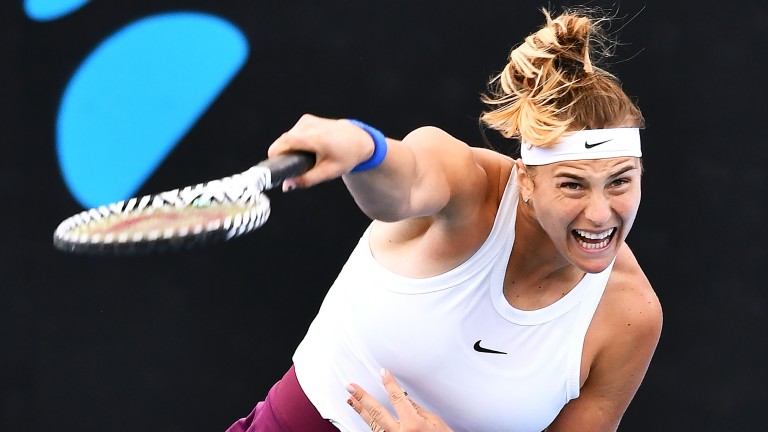 Aryna Sabalenka is one of the WTA Tour's most powerful hitters and could join the ranks of major winners in the next fortnight
Mark Brake
1 of 1
By Adrian Humphries UPDATED 6:54PM, JAN 18 2020

Serena Williams is the market leader for the Australian Open, the first grand slam tournament of the season, following her return to the winner’s circle in Auckland this month and in an open-looking even it’s no surprise to see the oddsmakers fully respectful of the 23-time major winner’s chance.

Seven-time Melbourne Park singles winner Williams is one of the few players in the field who punters could have confidence in enjoying a decent run at Melbourne Park, although the eighth seed faces a potentially tricky opener against Anastasia Potapova, who holds strong claims to being the best young Russian player on the women’s tour.

To the relief of players and officials alike, the air quality in Melbourne in the wake of the forest fires in south-east Australian has improved since some desperately needed rain fell in recent days.

The clear sixth favourite in the title betting is Aryna Sabalenka and while the Belarusian didn’t quite live up to expectations in 2019, it could be a different story this year.

Tragically, Sabalenka’s father died in November, but the 11th seed seems to be channelling her thoughts into her day job, which may be helping her to handle her loss.

She made the semi-finals in Adelaide in the week before Melbourne Park and, after finishing 2019 on a positive note with a dominant victory in the Elite Trophy Zhuhai, Sabalenka could go to Victoria highly focused in her bid to land a first major title.

The bookmakers respect the chances of the powerful Minsk native too and definitely aren’t giving her away this fortnight.

She is capable of bludgeoning her way through the third quarter, in which Simona Halep and Belinda Bencic are deemed to be her biggest rivals.

Halep, French Open winner in 2018, will be looking to add to her Wimbledon triumph with a first hard-court major, but the Romanian could have it tough from the outset against Jennifer Brady.

Bencic is capable and was undone in the US Open semi-finals by Flushing Meadows champion Bianca Andreescu, who is not competing in Melbourne due to injury.

But if the Swiss ace came unstuck against the accurate power hitting of Andreescu, it could be a similar story should she meet Sabalenka.
Bencic too faces a potentially difficult opener against Anna Schmiedlova, who has given the sixth seed trouble before.

Sabalenka is not the only WTA ace whose father passed away recently. American Amanda Anisimova lost her dad in August, while Jelena Ostapenko’s father also died in January.

Ostapenko, French Open heroine in 2017, may need time to recover from her loss, but Anisimova is showing signs that the mourning phase is behind her and her focus is returning on court.

The 18-year-old could be a natural for her home major in New York later this season, but it may be folly to overlook her chances of nailing a first singles Slam crown down under.

Anisimova made the last 16 on her main-draw debut 12 months ago and that has to go down as a hugely positive effort in the ferocious Aussie heat.

A year older and quite a bit wiser, Anisimova could go close to making the final weekend this time around.

Garbine Muguruza lost her mojo big-time in recent seasons, but after a period of soul-searching in tennis’s short close season the Spaniard could be ready to join battle properly once again.

Victorious in the French Open in 2016 and at Wimbledon a year later, Muguruza looked to have a bright future a few years ago. But having appeared a potential world-beater on hard surfaces in her early career, the potency on the terrain fell away and a raft of fellow WTA players comfortably had her measure in the US and Australian Opens.

After working harder on her physical and mental fitness in the winter break, Muguruza has started 2020 on a brighter-looking note. The 26-year-old reached the semi-finals in Shenzhen and then pulled out of her Hobart quarter-final due to a reported viral illness.

However, Muguruza has bounced back from reported health concerns in the past and the world number 34, who hopes to be fit for Melbourne, may also have been conserving some energies for the coming fortnight.

At her best, she could still trouble the likes of Pliskova and Elina Svitolina, who are also in the fourth quarter of the draw.

Others players to watch

Ashleigh Barty
The world number one from Queensland will surely be tough to stop as usual, but a busy week in Adelaide may not be perfect preparation for tennis’s toughest endurance test in Melbourne.

Petra Kvitova
The Czech went all the way to the Aussie Open final in 2019 after winning in Sydney the week before the major. But while Kvitova can be masterful down under, her Melbourne draw looks tougher this time around.

Naomi Osaka
Last year’s victor has taken on the services of coach Wim Fissette, which could boost the Japanese ace’s chances. However, her draw could hardly be tougher and she is no certainty to survive her opener against Marie Bouzkova.

Karolina Muchova
The Czech’s fine displays in 2019 have not escaped the notice of the oddsmakers and Muchova has an opportunity to carve a path through the easier half of the draw.