Australian Open tennis: who will win the men's title? 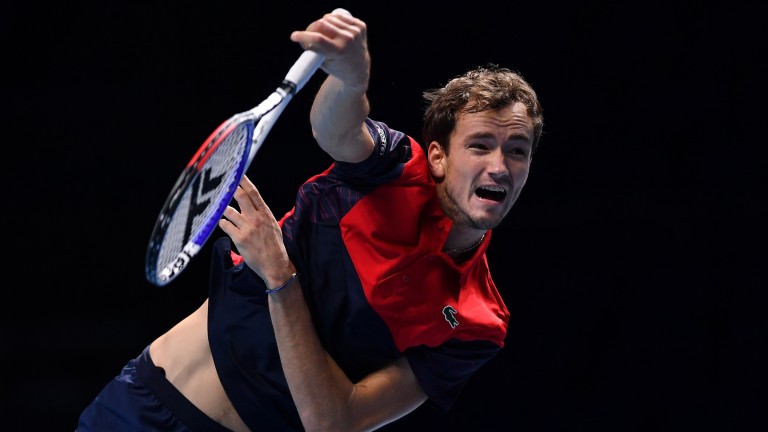 Roger Federer, Rafael Nadal and Novak Djokovic, the three most decorated male players of all time, have shared the last 12 Grand Slam titles between them and their superiority has shown no sign of slowing down.

Even though they are all into their 30s they have been able to maintain their impeccable standards and have won 55 majors between them to fend off the challenge of a hungry and younger generation.

However, that stranglehold cannot be sustained forever - Federer, now 38, is without a major since winning in Melbourne two years ago - and although Djokovic and Nadal still set the bar high, there is every chance that a fresh face could get his first taste of Grand Slam glory.

There are a number of intriguing younger players lining up in Melbourne who have the weapons to serve it up to that formidable trio, but none that hold stronger claims than rising Russian Daniil Medvedev.

The 23-year-old Moscow native enjoyed a breakthrough 2019, winning four titles and reaching the final of the US Open, and his rapid improvement has rewarded him with the fourth-seed spot for the first major of the year.

Medvedev has an unorthodox style which is extremely uncomfortable to play against. He can win games ugly and has learnt how to control emotions that would often got the better of him.

Last season’s run to the final of the US Open at Flushing Meadows, where he bumped into super Spaniard Nadal in the final, was a hint that his time could be fast approaching.

Many expected the big occasion against one of the game’s greats to get the better of Medvedev but, despite suffering an agonising five-set defeat, the Russian received plenty of praise and confirmed that he is the real deal.

Medvedev refused to give in, fighting from two sets down to take it the distance, and it is a scenario that will have taught him plenty.

With that big game experience under his belt, combined with his desire, the Moscow man is a dangerous proposition for anybody and avoiding short-priced favourite Djokovic until the final only enhances his claims.

Opening up against American young gun Frances Tiafoe is far from ideal, but coming through that unscathed will bolster Medvedev’s confidence and from then on there is little to fear until a potential fourth-round meeting with Stan Wawrinka.

That said, Medvedev outlasted Wawrinka in the quarter-finals at Flushing Meadows - the Russian has now won their two previous meetings in Grand Slam events - and he’d be strongly fancied to bring up the hat-trick against the Swiss veteran.

Andrey Rublev, who has won consecutive titles in Qatar and Adelaide, or Alexander Zverev could be lurking in the quarter-finals.

However, Rublev has not gone beyond the third round in three attempts in Melbourne and will need to take another step forward to topple his classier compatriot, while Zverev needs to convince he has the right mentality to succeed at the highest level.

A rematch with Nadal in the last four obviously requires more from Medvedev but he has at least proved he can go toe to toe with the elite and he makes plenty of appeal from an each-way perspective.

Medvedev has won all seven of his career titles on a hard-court and made a positive seasonal return at last week’s ATP Cup in Sydney, where he went down in a deciding set to eventual champion Djokovic in the semi-finals.

That was further indication that the Russian is narrowing the gap on the big three and the first major of the year in Melbourne may be his chance to show it.

Djokovic, who has won four of the last six Grand Slam titles, is evidently going to be a tough man to beat and being housed away from his two main market rivals Nadal and Medvedev is another positive.

However, 6-5 looks skinny enough given he may have to beat Stefanos Tsitsipas and Federer just to make the final and an each-way wager on Medvedev at 8-1 is far more appealing.

Djokovic and Nadal look likely to win their quarters but Federer may be more vulnerable than his two old foes.

Federer’s last Grand Slam success came in this event two years ago and only three of his 20 majors have been recorded since 2012.

Two of those title triumphs have come in Melbourne but he was a fourth-round casualty against Tsitsipas last year and it appears the 38-year-old’s peak performances are fewer and further between.

There are no obvious alternatives to Federer in the third quarter but a chance should be taken on improving Italian Matteo Berrettini, who has risen up to eighth in the world rankings.

Berrettini has landed in arguably the softest section of the draw and a quarter-final berth should be well within reach for the hard-hitting Italian.

The 23-year-old reached the semi-finals of the US Open in September, showing he is now mentally prepared for the biggest of tests, and it would be a disappointment if he can’t at least secure a last-eight spot.

Fellow countryman Fabio Fognini would be the biggest concern before then but for all his natural ability he has only one Grand Slam quarter-final appearance to his name and tends to disappear in showpiece events.

Denis Shapovalov could also serve it up to Federer in the third quarter but the Canadian youngster has some tough assignments ahead with an opening round clash against Marton Fucsovics potentially followed by meetings with promising teenager Jannik Sinner and Dimitrov.

The supremely talented Greek youngster was a semi-finalist in Melbourne last year and it shouldn't be long until he makes his mark in a Grand Slam. However, a dominant Djokovic is likely to be lurking in the last eight.

The German has yet to live up to his billing at Grand Slam level with two quarter-final appearances on the French Open clay his best efforts to date. A poor temperament can also get the better of him.

Consecutive titles in Qatar and Adelaide have the Russian star oozing confidence but he has a tough draw to contend with and has yet to convince in a showcase event such as this.

The Austrian ace is a two-time Grand Slam finalist but he recorded both on his preferred surface at the French Open. He is a clay-court specialist and has it all to prove in Melbourne where he has yet to go beyond the fourth round in six attempts.

Maintaining his focus will be key if he is to contend. Kyrgios is sure to want to deliver in front of his home crowd following his promise to donate to victims of the tragic bushfires after every ace he serves. Even so, he is tough to trust and there is little juice in his price.