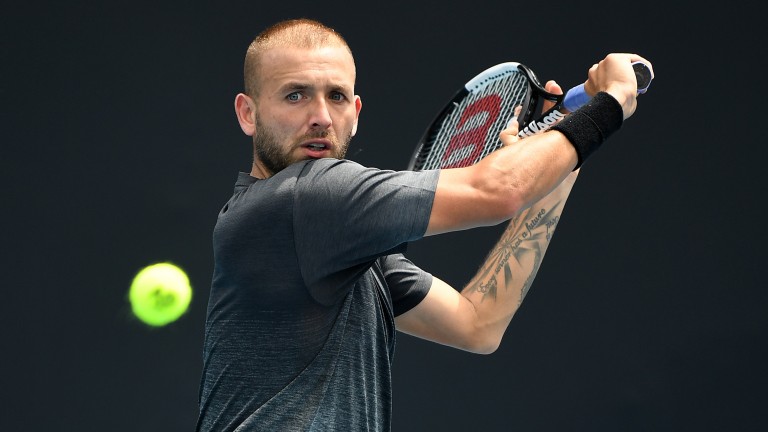 Dan Evans came from two sets down to pip Mackenzie McDonald in his opener but the Briton could perform better in round two
Morgan Hancock
1 of 1
By Adrian Humphries 5:45PM, JAN 20 2020

Extreme weather conditions down under played havoc with day one of the Australian Open with only half of the 64 matches being completed and many clashes not even started due to heavy rainstorms.

A busy day two looked likely – weather allowing – but the first-day downpours in southern Victoria did not stop many of the big-name players progressing.

The biggest casualty on the opening day was 13th seed Denis Shapovalov, who had been in decent form going into the season's first major, losing his cool in a 6-3 6-7 6-1 7-6 loss to Marton Fucsovics, while women's 24th seed Sloane Stephens succumbed, not entirely unexpectedly, in three sets to China's Shuai Zhang.

With most of the star turns getting the chance to complete their matches, there are consequently a lot of short prices in the early betting on the day three clashes.

However, there could be a shade of handicap value on offer about a couple of longer-price favourites, one of which features Britain's highest-ranked male player.

Dan Evans responded to advice from Tim Henman that he should "miss a few meals" when fighting back from two sets down to edge out Mackenzie McDonald 3-6 4-6 6-1 6-2 6-3 in his Melbourne Park curtain-raiser.

It was a gallant finish from the Birmingham battler, but punters will understandably have concerns over whether Evans is able to post a first win in three matches against his last-64 opponent Yoshihito Nishioka after making such hard work of things against McDonald.

The Australian Open is effectively Japanese ace Nishi­oka's home major, but it may be worth taking a chance that Evans finds better in his second singles outing this week.

The 30th seed is 4-6 to make light of a concession of a game and a half to the world number 71 and even though Evans looks more of a force on US hard courts than their Aussie equivalent, that price could still be worth taking.

Cori Gauff franked the form of her Wimbledon victory over Venus Williams last summer when defeating the American legend 7-6 6-3 in her first Grand Slam outing of the year.

Gauff's reward is a date with Sorana Cirstea, and the early moves have been for the experienced Romanian to upset the 15-year-old.

But while Cirstea's 6-2 7-6 victory over 32nd seed Barbora Strycova was a decent result, it should not be forgotten that Gauff is possibly the most exciting young player tennis has ever seen.

The Williams repeat victory was a fine one and Gauff is a decent price to successfully give up two and a half games on the handicap.