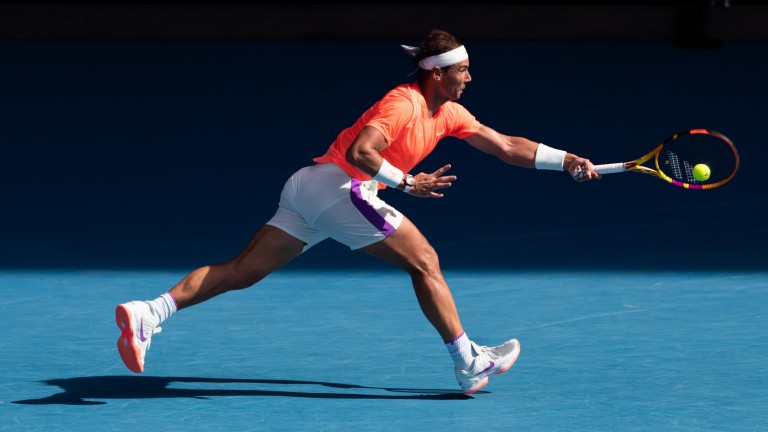 Rafael Nadal reaches out wide to play a forehand during his 6-3 6-4 6-2 fourth-round victory over Fabio Fognini in Melbourne
Mackenzie Sweetnam
1 of 1
By Adrian Humphries 11:26AM, FEB 16 2021

Free tennis tips, best bets and analysis for day ten of the Australian Open in Melbourne on Wednesday.

Daniil Medvedev leads Andrey Rublev, who he meets in the quarter-finals of the Australian Open, 4-0 in career meetings, all of which were on hard courts, and has won all nine sets the pair have contested.

Yet the oddsmakers expect the fifth clash between the Russian friends to be closer than the previous ones. They might be right, too, although punters may remember that oddsmakers also gave Rublev a bit more of a chance going into their US Open quarter-final clash last September when the scoreline was 7-6 6-3 7-6.

Rublev looks sure to play a bigger role in their rumbles in the near future, though. He's not the strongest player physically and that has probably cost him in their clashes, but the outsider definitely has the game and the talent to take more of a hand.

It's possible that Rublev could even upend Medvedev, which could serve to boost Rafael Nadal's hopes of a run to the final. But for now it's probably wise simply for punters to anticipate a closer clash between the combatants.

With so much uncertainty regarding how the match will be played out, the best approach would have been to back over 3.5 sets. But oddsmakers are offering that markets less days, so split stakes on a four-set and five-set match look the order.

Stefanos Tsitsipas received a fillip when he walked over against injury victim Matteo Berrettini - that clash could have been a thriller - but the extra rest is not guaranteed to save the improving Greek against Rafael Nadal.

Not for the first time going into a major tournament, Australian Open second seed Nadal was painting a negative picture regarding a back strain when transferring from Adelaide to Melbourne. But the Majorcan's wellbeing started to improve around the time that Novak Djokovic was struggling to see off Taylor Fritz in the third round.

The immediate positive effects for Nadal were seen in the fourth round when he silenced Fabio Fognini, third-round conqueror of Alex de Minaur, 6-3 6-4 6-2.

And considering Fognini looked in good form himself, that could be ominous for Tsitsipas. Nadal knows he will need to find more against the fifth seed, but he will also be well aware that Thanasi Kokkinakis took Tsitsipas to five sets in round two - and that he has won all five sets the pair have contested on outdoor hard courts.

With Nadal stepping things up in the tournament, backing him to make light of a handicap concession of 2.5 games to Tsitsipas could be wise.

Something has to give when top seed Ashleigh Barty meets Karolina Muchova and it will probably be the lower-ranked player who has to give best.

Both women have progressed to the last eight without dropping a set and Barty won her prep event in the week before the Aussie Open started. Playing a lot of tennis can sometimes have a negative effect, but Barty looks like she still has more to give in her homeland.

Muchova is a tough cookie and is no stranger to pushing top players to tiebreak sets, but Barty has a chance to nail a home Grand Slam triumph in the coming days and it may take a higher-ranked performer than 25th seed Muchova to lower her colours.

Barty won their only previous meeting 6-3 6-4 in the 2018 US Open. But Muchova, no stranger to long sets, may trouble the Queenslander a little more now so backing the match to last for over 19.5 games may be worth chancing.

The fast-improving Jessica Pegula won her only previous clash with Jennifer Brady 7-6 6-4 in the W&S Open which was played in the Flushing Meadows bubble last year, so while Brady is no stranger to crushing opponents she could have a match on her hands in this all-American clash.

Pegula's credentials have become considerably stronger after she ousted fifth seed Elina Svitolina, who was in decent nick herself, 6-4 3-6 6-3 in the fourth round.

Punters who may be expecting Brady to post a fifth successive straight-sets triumph in the Aussie Open singles may wish to afford Pegula a little more respect.

If Svitolina was not safe against Pegula, then it's possible that 22nd seed Brady may not be either. Using their Big Apple clash as a yardstick, with a potentially competitive encounter in prospect the way to go could be to back over 19.5 total games.