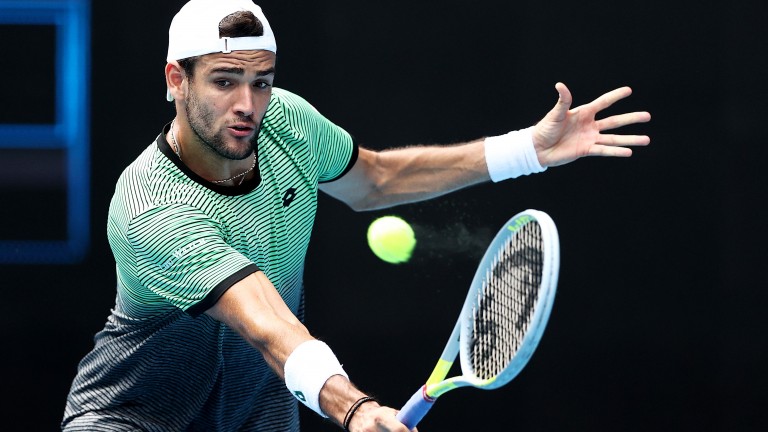 Free tennis tips, best bets and analysis for day six of the Australian Open in Melbourne on Saturday.

Rafael Nadal takes on Great Britain's Cameron Norrie on Saturday for a place in the fourth round of the Australian Open and few would dare bet against the Spanish legend.

Nadal, who bulldozed his way past Laslo Djere and Michael Mmoh to reach this stage, is no bigger than 1-50 to put an end to Norrie's Melbourne adventure on a day when there are a number of more competitive third-round contests for punters to concentrate on.

In the men's draw, Matteo Berrettini takes on Karen Khachanov in what could prove to be the best match of the day at Melbourne Park, and Berrettini gets the vote.

The 24-year-old Italian is making his first third-round appearance in the Australian Open but he has plenty of hard-court Slam pedigree, reaching the semi-finals of the 2019 US Open and the fourth round of the same event the following year.

Both he and Khachanov will look to slug it out from the back of the court andBerrettini has has the better of their previous duels, leading 3-0 in head-to-head meetings.

The Roman has made a promising start to the season, beating Gael Monfils, Dominic Thiem and Roberto Bautista Agut in the ATP Cup last week and seeing off the experienced Kevin Anderson in the opening round.

Given his record over Khachanov, he should see off the big Russian with something to spare and can be backed giving up 1.5 sets on the handicap.

Fabio Fognini became embroiled in a spat with fellow Italian Salvatore Caruso in a marathon match on Thursday and the fiery 33-year-old should see his tournament ended at the hands of home hope Alex de Minaur.

Aussie ace De Minaur has looked in great nick in Melbourne, seeing off Tennys Sandgren and Pablo Cuevas in straight sets, and he is a strong favourite to continue his march against Fognini.

However, Fognini has looked up for the fight this week, which is not always the case where the Italian is concerned. De Minaur should win, but the underdog could nick a set.

In the women's draw, world number one Ashleigh Barty can be backed to breeze past Russia's Ekaterina Alexandrova.

Barty has returned to the tour as if she had never been away, easing to a title win at the Yarra Valley Classic last week and sweeping aside Danka Kovinic and Daria Gavrilova in her first two Australian Open matches.

Alexandrova is in excellent form, but Barty's defensive skills should frustrate the 26-year-old, who tends to attack at every opportunity. The Aussie has won her last three matches in straight sets and should do so again.

Elise Mertens is on a hot streak but she looks too short against a player of Belinda Bencic's ability.

Mertens, who won the Gippsland Trophy and eased through to the third round, deserves to be favourite but Bencic is a US Open semi-finalist who is likely to improve for coming through tough matches against Lauren Davis and Svetlana Kuznetsova.