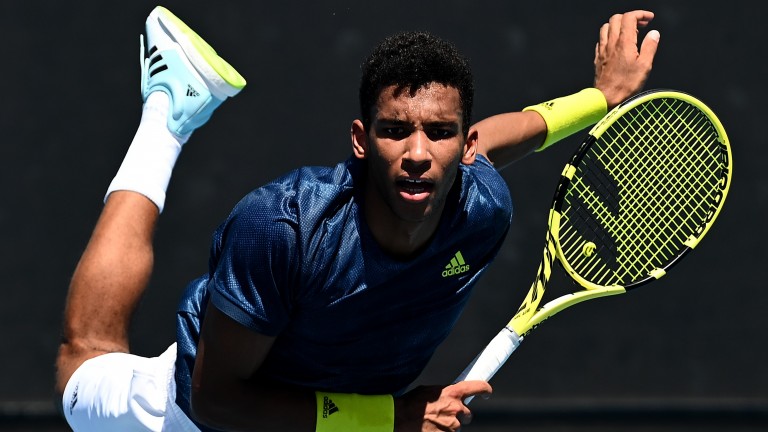 Free tennis tips, best bets and analysis for day five of the Australian Open in Melbourne on Friday.

Canadian tennis fans were hoping on Wednesday that the Australian Open third-round clash between their countrymen Denis Shapovalov and Felix Auger-Aliassime would be the late bill-topper at Melbourne Park and that clash of friends would make for a true spectacle.

Shapovalov is shading favouritism by virtue of his higher rank - he is the world number 12 while his compatriot is seven places lower on the ATP chart - his greater experience and the fact that he leads Auger-Aliassime 3-1 in their personal series.

But while Shapovalov, who swept aside qualifier Bernard Tomic 6-1 6-3 6-2 in the last 64, is an exciting talent himself and on an upwards trajectory in his career, Auger-Aliassime is quite possibly the most exciting talent the ATP Tour has seen since Juan Martin del Potro.

Del Potro's career was blighted by injuries, of course, and it's likely that Auger-Aliassime, providing he stays fit and healthy, will go on to achieve considerably more in his career than the towering Argentinian.

Considering he has yet to win a main-tour title, Auger-Aliassime's record is remarkable. Since 2019 he has reached the final of seven singles events, on hard courts, grass and clay. The 20-year-old has all the shots in the book and the physical strength he should gather in the next year or so may be all that is needed to make him a regular trophy contender at the highest level.

Shapovalov is good enough to take advantage if opponents aren't at their peak and Auger-Aliassime will know that. But the early support for FA-A when the betting was first issued tells a story that it could be his turn to ascend.

Improving Pedro Martinez can be considered against Dusan Lajovic, but the unheralded Serb did well to upend Alexander Bublik in four sets in round two so there is no great desire to support the Spaniard.

In the women's action, there's a fascinating clash in store between Su-Wei Hsieh and qualifier Sara Errani and with a lot of one-sided encounters the norm after the opening rounds, it may be worth punters trying to find a bet in that match.

Hsieh has been well supported early on to add to triumphs over Tsvetana Pironkova, another qualifier, and 2019 US Open champion Bianca Andreescu. But while those results read well, it should perhaps be remembered that Andreescu has not had the court time she would have wished for due to being quarantined in the lead-up to the season's first Grand Slam.

Errani has dismissed 30th seed Qiang Wang and Venus Williams, although the American multiple Slam champion incurred a foot injury late in their opening set which did for her. That said, there are few feistier performers than Italian veteran Errani and she may still make Hsieh toil.

The oddsmakers aren't giving much away but Errani may not be crushed the way Hsieh's previous victims were, so a minor interest on the outsider to win at least a set can be had.

Marketa Vondrousova can be considered in her match against Sorana Cirstea and the Czech may well prevail, but the Romanian's game looks in good order so it may be close, as the betting suggests.