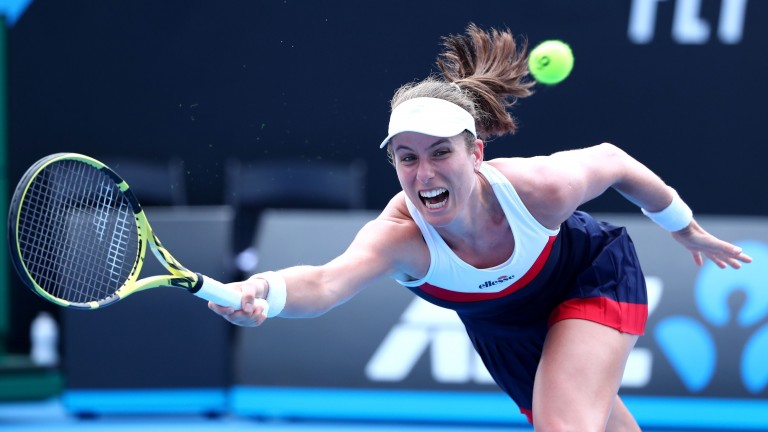 Johanna Konta reaches wide to play a forehand in her first round victory over Ajla Tomljanovic
Michael Dodge
1 of 1
By Adrian Humphries 6:35PM, JAN 15 2019

Johanna Konta posted her brightest result in a long time when defeating steady improver Ajla Tomljanovic 7-6 2-6 7-6 to set up a second-round clash with Garbine Muguruza.

Former British number one Konta was below par for much of last year, but showed that she could still be a force when seeing off Tomljanovic.

Muguruza is likely to be a tougher test although Konta, who was trimmed to 100-1 for the title, knows that at her best she has beaten the Spaniard twice.

Neither player had a 2018 to remember, but Muguruza is an 8-15 chance to win the day this time and level their personal series at two wins apiece.

Title favourite Serena Williams got her tournament off to an ideal start when coasting to a 6-0 6-2 victory over fellow mother Tatjana Maria.

Williams was cut to 7-2 from 9-2 for the title and next meets Eugenie Bouchard, the Canadian who is having something of a mini-revival herself.

Top seed Novak Djokovic opened with a comfortable 6-3 6-2 6-2 victory over Mitchell Krueger but faces a potentially tougher task in the last 64 against Jo-Wilfried Tsonga, whom he defeated to win his first Melbourne Park singles crown in 2008.

Tsonga ousted Martin Klizan 6-4 6-4 7-6 and the experienced Frenchman looks to be playing as well as he has done for a number of years.