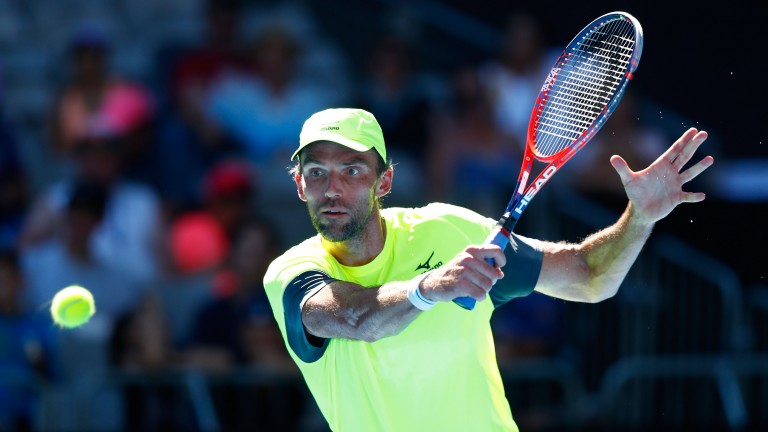 Veteran Ivo Karlovic is back enjoying his tennis again at the Australian Open
Michael Dodge
1 of 1
By Adrian Humphries UPDATED 3:05PM, JAN 16 2019

Ivo Karlovic is back in the mood to play tennis and the veteran Croat could make a nuisance of himself against Kei Nishikori in his current form.

The eighth-seeded Nishikori will probably find a way to win but Karlovic has done enough in three of his four clashes with the Japanese number one to believe he could still keep the sets close.

Nishikori is a master at winning sets, but it would also be a surprise if Karlovic did not help to take at least a couple of sets to a tiebreak.

The favourite started slowly in his opener against Poland's Kamil Majchrzak but fought back to triumph in five sets.

That was a terrific effort from Majchrzak but it may also afford Karlovic hope that he can hurt Nishikori even more.

Big Ivo, who took Kevin Anderson close in the final of the Indian Open earlier this month, gets a start of 5.5 games on Betway's handicap and is worth a punt.

Lucas Pouille and Max Marterer both stepped up on recent efforts in Aussie Open first-round victories, and while it's likely that we could see better from Pouille in 2019, the same applies to Marterer.

Pouille endured a dire time of it last season and he could vie again for a top-ten ranking this year. But although the Frenchman is a fine performer when he's on top of his game, it's just possible that Marterer could put up some decent resistance against his opponent.

Either player taking a two-set lead would obviously not be ideal for anyone who follows the advice to get long of total games at 37.5, but handily both players could still be fancied to keep it competitive by fighting back from the brink.

Laura Siegemund threw the formbook out of the window when dumping two-time Aussie Open champion Victoria Azarenka in the last 128 in Melbourne and the German could be worth following in such a positive frame of mind.

Her next task is to try to stop Su-Wei Hsieh, which is unlikely to prove easy given that the 28th seed is as fit as a fiddle and well suited to prospering in Victoria's searing heat.

However, while tennis fans will be well aware of Siegemund's prowess on clay courts, she has been a serial underachiever on faster ones.

But judging by her triumph over Belarusian great Azarenka, it's worth taking a chance that Siegemund could cause problems for Hsieh, who famously dumped Simona Halep out of Wimbledon last summer.