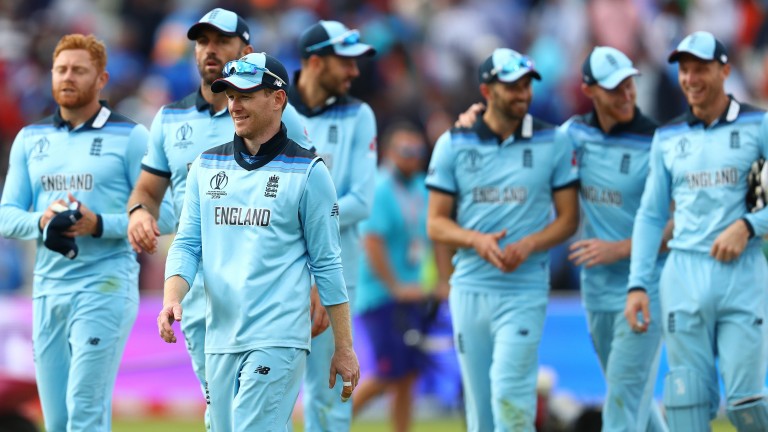 England swatted aside India and New Zealand to go from the brink of elimination to a first World Cup semi-final appearance since 1992 and now the Old Enemy stand between them and a place in the final.

Australia, five-times World Cup winners and defending champions, were on course to play New Zealand in the last four only for a shock defeat to South Africa to set up a date with hosts and ante-post favourites England.

Eoin Morgan's men went about qualification the hard way, losing to Pakistan and Sri Lanka before a 64-run loss to the Aussies, for which they will seek redemption at Edgbaston.

This is a different England team from the side who lost at Lord's though. Battle-hardened, brave and with Jason Roy at the top of the order, the Three Lions look ready to take a huge step towards their maiden World Cup title.

The Surrey batsman not only fired 60 and 66 in their final two group assignments but he assumed the role of aggressor at the top of the order, allowing Jonny Bairstow to rack up successive centuries.

The first of those tons came at Edgbaston and England will be grateful they lock horns with Australia at the Birmingham venue as opposed to Lord's, where they could have met in the final and where they were skittled out for only 221 against Aaron Finch's ruthless seam attack.

Australia's World Cup campaign has progressed so smoothly since defeat to India in their third game but England will take solace from the Aussies' ten-run loss to a lacklustre South Africa side last time out, which revealed a chink in their armour.

Couple that result with the absence of Usman Khawaja and potential loss of Marcus Stoinis and Australia look short of the balance which gave them the foundations to spank England at the home of cricket. 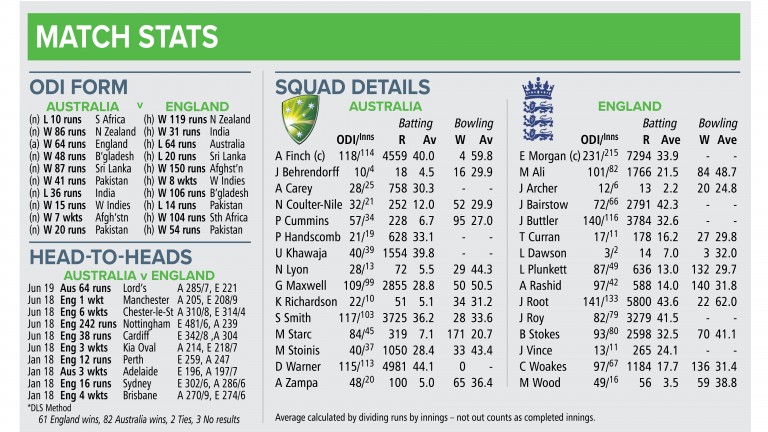 The tournament hosts are blessed with world-class talent all through the team but Ben Stokes always looks ready to put in a match-winning display.

From the moment he took that sensational catch in the World Cup curtain-raiser, Stokes has looked a player in form and he will be eager to build on scores of 89 and 79 against big guns Australia and India in this tournament.

Both of those totals came in pressure-cooker environments, as did his unbeaten knock of 82 against Sri Lanka at Headingley, where he nearly single-handedly snatched victory from the jaws of defeat.

With 381 runs and seven wickets to his name, Stokes to be man of the match could be a value bet, as could Mitchell Starc to be Australia's top bowler.

The seamer is head and shoulders above the rest in the wicket-taking standings with 24 scalps and, although conditions will differ this time, he took 4-43 against England at Lord's.

Team news
Australia
Peter Handscomb is in line to face England having replaced the injured Shaun Marsh in the squad while Usman Khawaja is out and Marcus Stoinis is a doubt. Matthew Wade could feature.

England
Eoin Morgan's side are expected to remain unchanged.

Venue
Two of the four teams to have batted first at Edgbaston in this tournament have won and one of those were England, who racked up 337 runs in their defeat of India in the Midlands.

Weather
Cloudy with potential showers in the afternoon and highs of 21C.

Australia
Strengths
World-class individuals. This is not the Australia team we saw rolled over by England 5-0 last summer and it's because of a handful of elite individuals in David Warner, Steve Smith and Mitchell Starc who can win games on their own.

Weaknesses
Bowling depth. While Nathan Lyon finally offers Aaron Finch an excellent spin option, there is sometimes too much reliance on their openers to perform and Australia seem in need of another player to mop up in the middle overs.

Key player
Starc has been breathtaking with 24 wickets in the tournament.

England
Strengths
Batting depth. England's openers are something special but there is so much quality right through the batting lineup from the ever-reliable Joe Root at three to big-hitting Jos Buttler at six.

Weaknesses
Chasing. All three of England's defeats at this World Cup have come when they have batted second and it is no secret Eoin Morgan prefers his side to set the score.

Key player
There is justifiable hype surrounding Jason Roy. He gets the best out of Jonny Bairstow and his aggressive approach is crucial to getting England off to a good start.