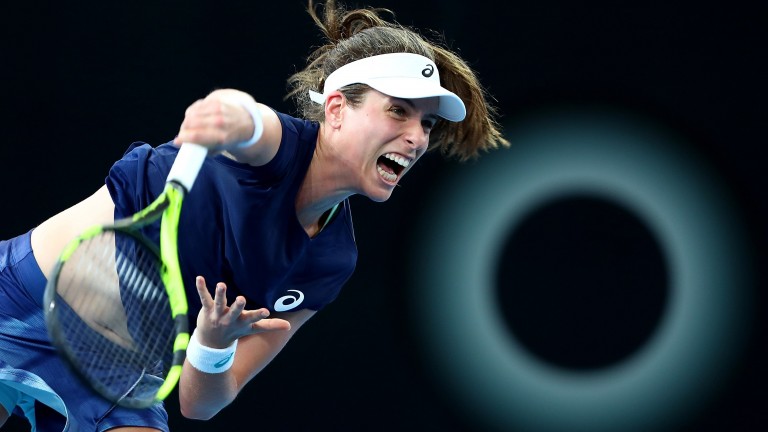 Novak Djokovic is the star turn in the men’s draw on day two as he begins his pursuit of a seventh Australian Open title against American Mitchell Krueger.

Women’s ante-post favourite Serena Williams makes her first Melbourne appearance since lifting the title at the beginning of 2017 when she takes on Tatjana Maria while her US Open conqueror Naomi Osaka opens up against Magda Linette.

Fabio Fognini enjoyed a productive 2018 campaign, hitting a career-high 13th in the world rankings, and the fiery Italian should start his Australian Open campaign with a comfortable victory over Spanish youngster Jaume Munar.

The 31-year-old picked up two titles on his beloved clay last season but also showed his effectiveness on a hard court by winning the Los Cabos Open, where he beat Juan Martin del Potro in the final.

Fognini reached the fourth round in Melbourne last year and he won’t have any problems with hot conditions in Victoria.

Munar has plenty of talent, as he demonstrated when wowing the crowds at the ATP Next Generation Finals in November, but he is a better player on slower surfaces and Fognini’s vast experience should help him record a comfortable win.

Daniil Medvedev is one of the brightest young talents on the ATP World Tour and it is worth backing him to swat aside South African qualifier Lloyd Harris.

Medvedev rose from 84th to 16th in the rankings in a breakout 2018 season where he picked up titles in Sydney, Winston-Salem and Tokyo.

He opted not to defend his Sydney title this year due to reaching the final of the Brisbane International, where he was beaten in the final by Kei Nishikori, but Medvedev is clearly playing at a high level.

He did not drop a single set on the way lifting trophies in Winston-Salem and Tokyo, which points to a no-nonsense approach to winning matches and could spell trouble for Harris.

The 21-year-old qualifier has potential but has seldom faced a player of Medvedev’s class.

Ajla Tomljanovic defeated Johanna Konta in Brisbane and the struggling Brit may find it tough to reverse form with the improving Australian.

Konta, who withdrew from Sydney last week with a neck injury, beat Sloane Stephens in Queensland but found Tomljanovic too strong as the home hope ran out a 6-2 7-6 winner.

The British number one struggled on her serve throughout and gave Tomljanovic 13 break-point opportunities in a match where she was second best. Improvement is needed but that might not be forthcoming given Konta’s recent injury troubles.

Eugenie Bouchard is often accused of being more concerned with her Instagram account than her tennis career but the Canadian is buckling down since appointing Michael Joyce as coach and should be backed to see off Shuai Peng.

Confidence, form and fitness have all eluded Bouchard is recent years but Joyce, who has coached Konta, Maria Sharapova and Victoria Azarenka, is starting to get the former Melbourne semi-finalist back to where she belongs

She is worth a bet to see off her injury-plagued opponent.