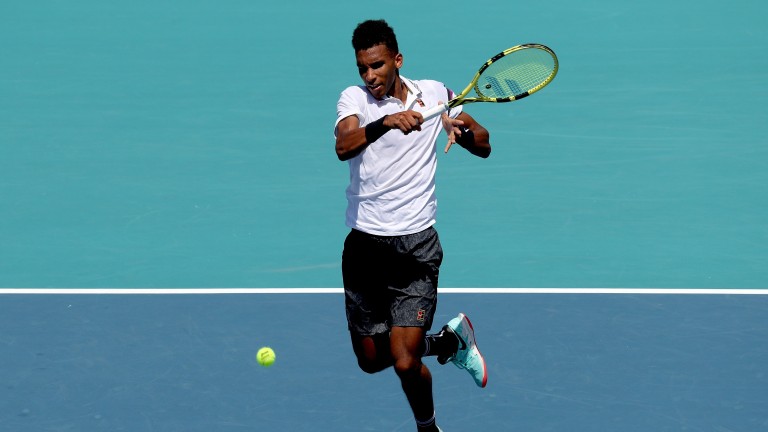 Felix Auger-Aliassime may be tough to beat in the US capital city
Matthew Stockman
1 of 1
By Adrian Humphries 6:19PM, JUL 28 2019

The men's Citi Open has tradition­ally been an excellent tournament for players looking for a spring­board to bigger things in their careers and Felix Auger-Aliassime will be chuffed to be back competing on hard courts.

None of the big three of Novak Djokovic, Rafael Nadal and Roger Federer are involved this week – of the trio only Nadal is expected to compete in next week's Masters Series 1,000 event in Montreal – and that means punters are getting a competitive outright heat in Washington DC.

Stefanos Tsitsipas is the top seed and the Greek could go well, as could Karen Khachanov and Daniil Medvedev, the second and third seeds.

Of the two Russians Medvedev is preferred, and he and sixth seed Marin Cilic are probably the most feared rivals in Auger-Aliassime's bottom half of the draw.

But the 18-year-old Canadian is such an exciting performer that he looks capable of defeating virtually anyone in the US capital.
The obvious exception could be Nick Kyrgios, but the Australian maverick is in the opposite half of the draw and FA-A beat the Acapulco champion at the Queen's Club last month.

There's a slight concern that Auger-Aliassime may have one eye on next week's Masters bash in his home city and that means stakes should be kept sensible on the teenager, but at his tender age he may still be glad enough to take any victory he can get.

The Italian ace, victorious in the Monte Carlo Masters in April, may offer a shade of value for a repeat but he could have to see off a talented outsider or two to return to the final.

Taylor Fritz is finally starting to justify his talents this season, but it's a gradual process for the laid-back Californian.

The inconsistent Lucas Pouille is difficult for punters to get right and the Frenchman may face serious challenges from wild-card Thanasi Kokkinakis and Janko Tipsarevic, both of whom could be viable title outsiders.

The bottom half of the draw looks more straightforward. Guido Pella is the second seed and the Argentinian is improving, but his fellow countryman Diego Schwartzman could be the one to beat.

The diminutive Schwartzman is well regarded for his clay-court prowess, but he's arguably more proficient on hard surfaces.

And unless Ernests Gulbis or Grigor Dimitrov bring anything special to the party, there looks little to stop him making the final.

Achieving the ATP's traditional Alpine double in successive weeks would be a huge feat, but it's just possible that Albert Ramos-Vinolas could do it.

The Spaniard lifted the Swiss Open trophy in Gstaad last week and next sets his sights on the Austrian Open title in Kitzbuhel.

That sounds a huge challenge and bookies don't expect Ramos-Vinolas to be up to the feat.

However, AR-V found his form only last week so he may still feel fresh. Also, of course, it may have been a long-term plan to save his energies for these titles all along.

Whatever the case, Ramos-Vinolas at his peak is one of the best clay-court exponents performing in Kitzbuhel.

Pablo Carreno Busta could also be a danger having made the semis in Hamburg last week, but the Gijon ace is also trying to rediscover his best form.

Dominic Thiem tops the bill but the world number four looks a little short-priced considering he may have his sights on the events in Montreal and Cincinnati.

Elina Svitolina is the top seed in the Mubadala Silicon Valley Classic, this week's most lucrative tournament.

But the Ukrainian can expect a tough battle with Amanda Anisimova, Victoria Azarenka and Venus Williams in the field.

The oddsmakers have not been caught napping as regards this trio, but deciding the best course of punting is still a difficult task.

Azarenka looked as if she had returned to something like her best until being thrashed by Simona Halep at Wimbledon and the Belarusian, who won the Classic in Stanford in 2010, could again be a major force.

Vika's chance is slightly preferred to that of Williams, the winner of only two of the eight finals she contested at Stanford between 1998 and 2016.

Williams, 39, may finally be starting to feel her age so it could be wiser to stick with talented 17-year-old Anisimova, who may find deter­mined Danielle Collins her toughest early opponent.

Sloane Stephens and Madison Keys are the big guns in the Citi Open women’s singles.

It's a stinker of an event for punters to unravel and in a tight-looking heat a small interest on promising young Russian Anna Blinkova could be a viable shout.

FIRST PUBLISHED 6:19PM, JUL 28 2019
Auger-Aliassime may have one eye on next week's Masters bash in his home city but at 18 he may still be glad enough to take any victory he can get