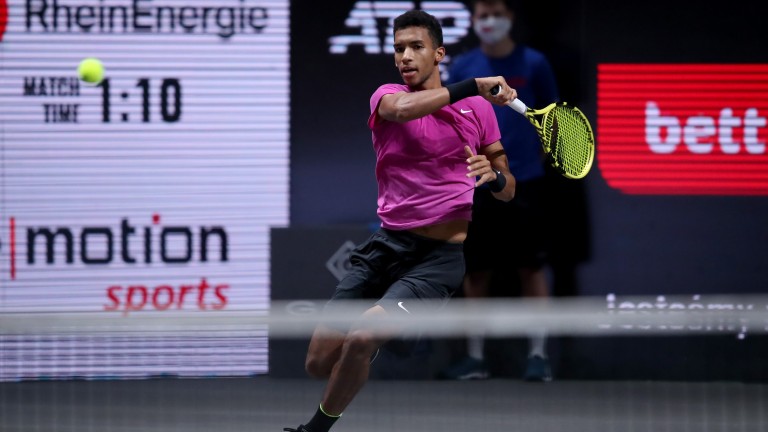 Felix Auger-Aliassime has been busy competing around Europe in recent weeks and could finish his season well in Paris
Christof Koepsel
1 of 1
By Adrian Humphries 11:47AM, NOV 3 2020

Tennis previews, predictions, tips and best bets for this week's ATP Paris Masters, which starts in Paris-Bercy on Monday.

Amazon Prime, from 10am Monday

Rafael Nadal is a fairly warm order to continue his Paris love affair with victory in the Masters Series 1,000 tournament in the city following his stunning triumph in the French Open there last month.

But while the Spaniard has got his preparations and scheduling pretty much spot-on since the sport returned from its principal lockdown break and the Paris-Bercy field has lost many of its intended field in recent days, Nadal could still find it tougher to hold off some of the sport's talented younger performers in action in the French capital.

The oddsmakers are taking no chances on Andrey Rublev after the Russian's fine recent run of form. But following title triumphs in Hamburg, St Petersburg and Vienna, Rublev looks to have done enough to secure a place in this month's ATP Finals in London and there is little point in supporting him at a single-figure price.

Instead, punters may find a couple of talented youngsters in the bottom half of the Bercy draw better value. Felix Auger-Aliassime and Alex de Minaur are both improving all the time and while indoor tennis tends to favour experienced competitors, this pair are so good that they're impossible to rule out.

Auger-Aliassime, who has been breaking many records in recent years, looks a future world number one providing he stays fit. He has been busier than De Minaur in recent weeks, but the fact he has turned out could be key.

De Minaur lost to Ugo Humbert in the Antwerp Open final last month, but the Australian could go on to achieve more in the game than the Frenchman and it may pay not to read too much into that loss. De Minaur is a long way from being the strongest player physically, but what he lacks in innate power he makes up for with a fine tennis brain and all-round game.

Stefanos Tsitsipas, seeded second in Bercy, and third seed Daniil Medvedev are the beacons anyone who backs Auger-Aliassime and De Minaur will hope fall early in the tournament. But while both are top players and worthy of much respect, neither is unbeatable and at the available prices they can be taken on.

Nadal could look to land the Paris-London double with Novak Djokovic, who he defeated in the Roland Garros final, having pulled out due to sustaining an injury in Vienna last week. This is a great opportunity for the Majorcan to eat into Djokovic's lead at the head of the ATP rankings. He'll be feeling good about things but, make no mistake with Nadal, the key title has already been landed on the red courts and anything else will be a bonus.