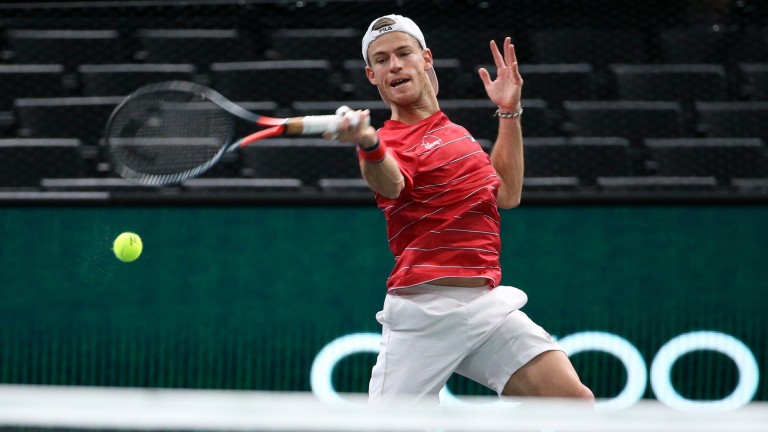 Diego Schwartzman is a useful performer indoors and the outsider-of-eight in the title betting may not be totally embarrassed in London
Jean Catuffe
1 of 1
By Adrian Humphries 3:40PM, NOV 15 2020

Tennis tips, best bets and TV details for day two of the ATP Finals at the O2 in London on Monday.

The picks are tougher on day two of the ATP Finals in London, so prospective backers are advised to bet on the Tokyo Group action with caution.

There aren't many ways regular punters can bet on world number one Novak Djokovic's opener against title outsider Diego Schwartzman other than total-game handicaps, but even that isn't easy.

Schwartzman has been playing well in recent months and looks capable of keeping it close against the five-time champion in their first indoor match. But Djokovic, who leads the diminutive Argentinian 5-0 in career meetings, will be fully aware of the need to post some good early figures against Schwartzman with round-robin matches against Daniil Medvedev and Alexander Zverev to follow.

The consensus handicap awards Schwartzman a start of 5.5 games, but while Djokovic played some superb tennis on the way to reaching the French Open final last month, he may do well to post a six-game supremacy margin against an often-underrated opponent who is still improving.

Medvedev should frank the form of his recent Paris Masters final victory over Zverev in the day two evening singles clash, but the Russian is not always the most reliable of punting mediums. Zverev has been playing well too.

The German, who leads their personal series 5-2, could help extend the clash to a third set but that is by no means certain to happen. That said, Zverev, who won their O2 clash last year 6-4 7-6, could keep things closer than in Paris so there may be a shade of value in a tiebreak being contested.