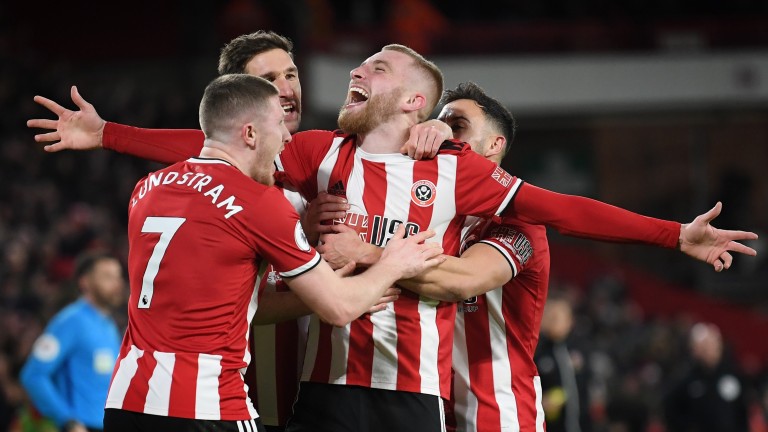 Aston Villa
Striker Wesley and goalkeeper Tom Heaton (both knee) are out. John McGinn has recovered from an ankle injury but may not be ready to start.

Sheffield United
The Blades should have a fully-fit squad to choose from. Keeper Dean Henderson is expected to extend his loan spell from Manchester United until the end of the season.

The ante-post relegation betting suggested that Sheffield United's Premier League clash with Aston Villa would be a significant fixture in the battle to avoid an immediate return to the Sky Bet Championship.

It certainly is for Villa, who have only Norwich below them in the table with ten games of their season remaining, but Chris Wilder's Blades are involved in an unlikely scrap for the European places.

Wilder's achievement in guiding the pre-season favourites for the drop to seventh place at this stage of the campaign is arguably as impressive as Jurgen Klopp's masterminding of Liverpool's romp towards the title.

As the season resumes, Sheffield United are above Tottenham and Arsenal and victory at Villa Park would take them into fifth place above Wolves and Manchester United.

Their success has franked Wilder's faith in the personnel and the system which won them promotion as Championship runners-up last season.

Few top-flight opponents have found it easy against the Blades' fluid 3-5-2 formation and four of their seven defeats came against the top two, Liverpool and Manchester City.

Eight of the squad have started at least 25 of United's 28 league games while a ninth, John Lundstram, has 23 starts and four appearances off the bench and that consistency of selection has served them well.

They should be at full strength for the trip to Villa, who have had to shuffle their pack more frequently after losing first-choice goalkeeper Tom Heaton and record signing Wesley to long-term knee injuries.

Influential midfielder John McGinn hasn't featured since Christmas due to an ankle problem although the Scot is back in the squad for the run-in.

While Sheffield United won three and drew one of their four games leading up to the suspension of the season, Villa had lost their last four including a damaging defeat at survival rivals Bournemouth.

Before that run their record against the Premier League's lesser lights had been decent and 24 of their 25 points had been picked up against teams in tenth place or lower in the table.

Wilder's Blades have proved that they are a bit better than that level, however, and they may well find it easier than Villa to get back into the swing of things after a three-month break.

United's regular starters all know their roles in the system and that continuity could prove decisive against a Villa side whose only clean sheet in their last 15 league games came against bottom club Norwich.

Villa conceded seven goals in two Championship meetings with the Blades last season and lost December's reverse fixture 2-0 at Bramall Lane, so the visitors look a tempting price to complete the double.

Aston Villa have taken just one point from a possible 36 against teams in the top nine of the Premier League.

FIRST PUBLISHED 12:02PM, JUN 16 2020
Sheffield United are above Tottenham and Arsenal and victory at Villa Park would take them into fifth place above Wolves and Manchester United