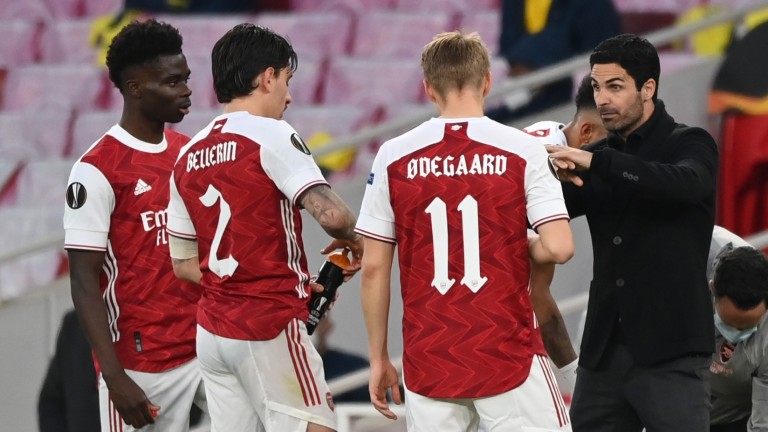 West Brom
Ashley Maitland-Niles is ineligible while Robert Snodgrass is ruled out.

It has not been a memorable season for Arsenal and the end of their Europa League hopes on Thursday has left plenty of Gunners fans with a sinking feeling.

It's not quite the sinking feeling that Sunday's opponents West Brom are enduring, but these things are all relative and there is little to get excited about when these two meet at the Emirates.

The Baggies head to north London knowing they still have something to play for as Burnley's game against Fulham on Monday means their immediate return to the Championship cannot be confirmed pre-match.

Sam Allardyce's men need to win but the writing has been on the wall for weeks, despite a shock 5-2 success at Chelsea on their last visit to the capital, and conceding an injury-time equaliser at Aston Villa in their last but one game has probably done for them.

A 3-0 loss at Leicester has been the only defeat in their last five matches, but they seem to have dug themselves too deep a hole and they head to Arsenal having won just three games since January 16.

So the motivation should be there but the ability might not be, while, with the Gunners it may be the other way round.

Patience is wearing thin with owner Stan Kroenke, not aided by the American's enthusiasm for the European Super League, and any hostility towards a football boardroom is always bad news for the man who picks the team.

It seems a long time since Mikel Arteta was celebrating an FA Cup triumph on August 1 and there's little evidence that Pep Guardiola's stardust has rubbed off on his former Manchester City assistant.

Arteta's charges have failed to score in five of their last nine home league matches and there could be plenty of soul-searching over the summer with European qualification looking unlikely after their Europa League exit to Villarreal.

Punters have to wonder whether they will be able to rediscover their attacking verve when there appears no prize on offer, although Pierre-Emerick Aubameyang did hit the post twice against the Yellow Submarine on Thursday.

But Arsenal have scored more than one goal in just four of their last 15 home league matches and with little on the line and the Baggies likely to be eyeing a smash and grab, it is a surprise to see under 2.5 goals available at odds-against.

West Brom have scored just one goal in their last seven visits to the Emirates.