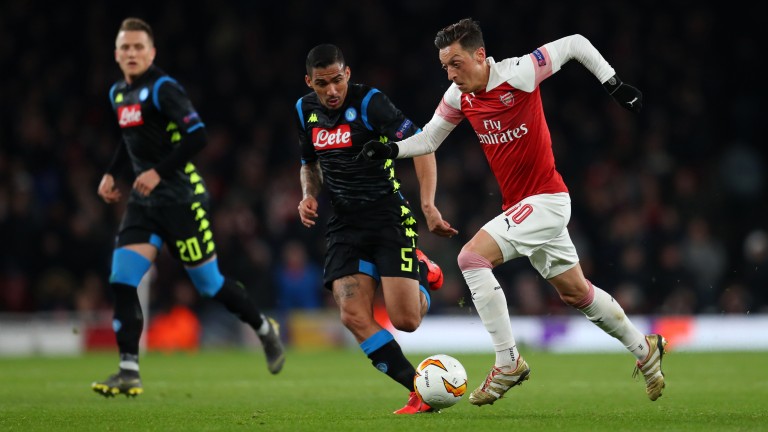 Mesut Ozil has looked more at ease in European matches
Catherine Ivill
1 of 1
By Dan Childs 8:00PM, MAY 1 2019

Arsenal's hopes of a top-four finish have been severely damaged by three successive league defeats but they have been showing no signs of weakness in the Europa League and could be too strong for Valencia in the first leg of their semi-final at the Emirates.

The success or failure of Unai Emery's first season in London will depend on whether he delivers Champions League qualification.

However, Arsenal are not in control of their destiny in the Premier League, needing a stumble from Chelsea or Tottenham, and that may influence Emery's thinking.

Emery has sent out strong teams for Europa League nights throughout the campaign and his options for the semi-final are boosted by the recovery from injury of Nacho Monreal and Mesut Ozil.

Getting the best out of Ozil will be crucial because Arsenal can no longer call on Aaron Ramsey, whose hamstring injury has ruled him out for the rest of the campaign.

It has been Ozil's least effective season in an Arsenal shirt but he still has match-winning ability and is the Gunners' best hope of supplying quality service into their front two of Pierre-Emerick Aubameyang and Alexandre Lacazette.

Ozil appears more at ease with the technical nature of European football than the rough and tumble of the Premier League and the same could be said of many of his team-mates.

Arsenal have had plenty of success on Europa League nights and their 3-0 aggregate quarter-final success against Napoli was achieved at a time when their league fortunes were taking a turn for the worse.

Napoli, a team who caused Liverpool problems in the Champions League group stage, were surprisingly brushed aside with ease and if Arsenal can deliver similarly high standards across the two games against Valencia, they will be tough to beat.

Valencia are in a similar boat to Arsenal in their domestic league having fallen just off the pace in the battle for a top-four finish.

They are three points adrift of fourth-placed Getafe with three games to play and missed a huge opportunity on Sunday when losing 1-0 at home to mid-table Eibar.

Los Che are unbeaten in six Europa League knockout games although they were minutes from elimination in the round of 16 when Goncalo Guedes's injury-time goal clinched a 1-1 draw away to Krasnodar, securing a 3-2 aggregate success.

They defeated La Liga strugglers Villarreal 5-1 on aggregate in the quarter-finals but facing Arsenal will be their toughest test of the competition.

Arsenal need to be alert to the threat from Spanish international striker Rodrigo and Portuguese winger Goncalo Guedes, who is on a hot streak of five goals in six appearances.

But the Londoners have kept clean sheets in four of their last five Europa League games and another shutout could pave the way for a crucial victory.

Team news
Arsenal
Mesut Ozil (foot) and Nacho Monreal (calf) are expected to return but Hector Bellerin, Rob Holding (both knee) and Danny Welbeck (ankle) are out long-term, while Denis Suarez (groin) and Aaron Ramsey (hamstring) will miss the rest of the season.

Valencia
Denis Cheryshev (knee) has joined Geoffrey Kondogbia (thigh) on the sidelines. Cristiano Piccini (concussion) is a doubt and Francis Coquelin is suspended.