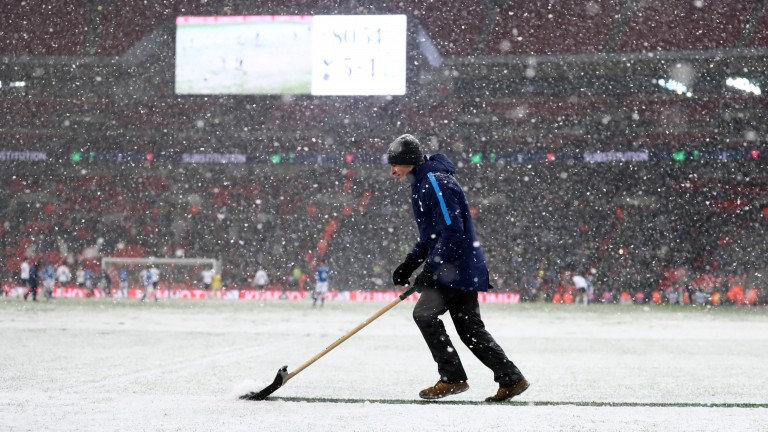 Ground staff clear the pitch of snow during Tottenham v Rochdale at Wembley
Catherine Ivill
1 of 1
By Dan Williams UPDATED 11:50AM, MAR 3 2018

Unfortunately for Arsenal fans Thursday night's Premier League fixture against Manchester City at the Emirates Stadium went ahead, but the big freeze engulfing the UK and Ireland has wreaked havoc on the sporting schedule and is threatening to destroy the weekend's action.

Clubs throughout England and Scotland were cancelling their fixtures as the snow continued to fall on Friday.

Wales and the south west of England is feeling the full force of Storm Emma and The Beast From The East, and the Met Office has issued Red weather alerts - meaning there is a risk to life.

No Premier League games have been called off yet but Southampton v Stoke looks in most danger - the club are set to issue an update at 5pm on Friday.

Tottenham v Huddersfield is set to go ahead at Wembley.

Scotland has also been badly affected, and Friday's Pro14 rugby union clash between Edinburgh and Munster is off, as well as Dundee United v St Mirren in the Ladbrokes Football Championship on Friday and Saturday fixtures including St Johnstone v Hamilton in the Ladbrokes Premiership.

Battling the beast: Newmarket doing its best to keep the show on the road

Our photographers catch the wintry racing scenes in Britain and Ireland

In Ireland, all 33 GAA matches scheduled for this weekend have been postponed due to the adverse weather, as well as all this weekend's League Of Ireland football games.

Even countries such as Spain and Italy have been hit by the arctic conditions. Snow in Barcelona rendered the third day of pre-season Formula One testing a non-event on Wednesday, while Ospreys' Pro14 rugby union clash in Italy against Zebre is off due to doubts over the team's flight taking off and further snowfall expected in Parma.

With more sports events expected to be cancelled over the weekend be sure to check back with racingpost.com/sport for the latest info.