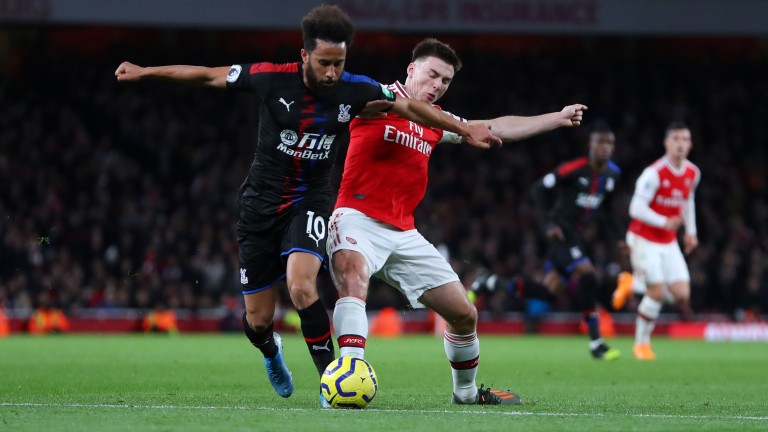 Kieran Tierney (right) has struggled to make an impression at Arsenal
Catherine Ivill
1 of 1
By Dan Childs UPDATED 4:04PM, NOV 27 2019

Arsenal
Dani Ceballos (hamstring) is ruled out and Sead Kolasinac and Hector Bellerin (both hamstring) are doubts.

Eintracht Frankfurt
Marco Russ (Achilles) is out long-term and Kevin Trapp (shoulder) has not featured since September.

Arsenal have set a strong pace at the top of Europa League Group F, amassing ten points from four games, but they may struggle to live up to their favourites tag against third-placed Eintracht Frankfurt at the Emirates.

Patience with Unai Emery is wearing thin as his team have fallen well below expectations.

The Gunners were not expecting to challenge for the Premier League title but hoped to be in the thick of the race for Champions League qualification.

They narrowly missed out last season, finishing a point behind fourth-placed Tottenham, and have spent big with the intention of nailing a top-four finish in 2019-20.

However, new-signings Pepe and Kieran Tierney have struggled to make an impact and Arsenal have found victories hard to come by.

Their winless sequence extended to six with a 2-2 draw at home to Southampton on Saturday which triggered a chorus of boos from disgruntled supporters.

Who'll be the star this time? #UEL pic.twitter.com/rfS2TJkuf3

Almost two thirds of the season remains but Arsenal are eight points adrift of fourth-placed Chelsea and need to go on an amazing run to get back into contention.

Improving league results has to be Emery's priority if he wants extra time to turn around the club's fortunes.

Losing to Eintracht Frankfurt is unlikely to cost him his job, but defeat at Norwich on Sunday could spell the end for the 48-year-old, who retains a sky-high reputation in his native Spain.

Given the situation he finds himself in, he is likely to make wholesale changes against Frankfurt and could be tempted to give the night off to top scorer Pierre-Emerick Aubameyang, who has taken on the extra burden of the captaincy in the wake of Granit Xhaka's fallout with the fans.

Aubameyang was in the starting line up when a fairly strong Arsenal side won 3-0 away to Eintracht Frankfurt on matchday one.

However, it was a flattering result for the Gunners, who lost the shot count 24 to 17.

Frankfurt were competitive for long periods and trailed 1-0 when midfielder Dominik Kohr was sent off in the 79th minute.

The Gunners seized their chance and netted twice inside the last ten minutes.

It was far from an ideal start for the Germans, who were semi-finalists in last season's Europa League, but they have responded well, winning two of the next three games.

Qualification would be a fair achievement for Adolf Hutter's side, who have had to adjust to the summer sales of key strikers Luka Jovic and Sebastien Haller to Real Madrid and West Ham.

They seem to be growing into the competition and can pick up a decent result in London, ensuring they go into the matchday six clash at home to basement boys Vitoria Guimaraes with plenty to play for.

Arsenal have not won any of their last six matches.