Blues can bounce back with London derby triumph 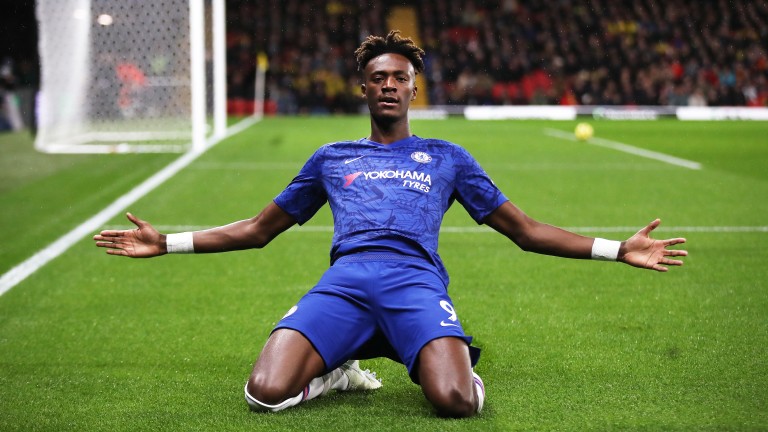 Tammy Abraham and Chelsea could have plenty to celebrate at the Emirates
Getty Images
1 of 1
By Steve Davies 1:54PM, DEC 28 2019

Arsenal
Calum Chambers returns from a ban. Hector Bellerin is a doubt. Kieran Tierney, Dani Ceballos and Sead Kolasinac are out.

Chelsea
Mateo Kovacic returns from suspension. Mason Mount should be recalled. Ruben Loftus-Cheek is out.

Putting faith in a team who were woeful at Stamford Bridge in their last outing might seem misguided but there are grounds for believing Chelsea can bounce straight back with a Premier League victory at Arsenal.

Frank Lampard’s men turned in a shocker against Southampton on Thursday, suffering a 2-0 defeat which they absolutely deserved. In their previous home game they had crashed 1-0 to Bournemouth.

Those were the low points of an inconsistent month for Lampard - there was a fine away win at Tottenham in between - and further proof that a top-four finish, given the state of the club he inherited, would represent an outstanding first season.

If there is an air of unreliability around Chelsea, however, it’s nothing compared to the mess Mikel Arteta has dived into at Arsenal.

The Spaniard began his reign with an encouraging 1-1 draw at Bournemouth on Thursday, a match in which their limitations were once again exposed, but there did seem to be far more urgency and Arteta can take something from that.

Chelsea are in a better place and they will also be happy to play away against a team who could struggle to park a roller skate, never mind a bus.

There will surely be opportunities for Chelsea and given the correct team selection – a recall for Mason Mount, for example – the visitors could fill their boots.

Arsenal are on a terrible run of just one win in 14 games and that sole success, 3-1 at West Ham, was pretty grim for an hour.

Arteta knows there needs to be a clear-out and better players brought in, although he’ll have been encouraged by Mesut Ozil turning in a rare decent effort at Dean Court. In contrast, Alexandre Lacazette produced a no-show and once again they were indebted to top scorer Pierre-Emerick Aubameyang for getting them out of bother.

Chelsea are going through a tricky patch and Arteta’s arrival has to be seen as a plus at Arsenal, but the Blues appear to hold the aces.

They are far more creative than their hosts – Chelsea have conjured up 315 shots, almost 100 more than Arsenal – and give away fewer. Chelsea are conceding 8.8 shots per game and Arsenal a staggering 15.8.

Arsenal have leaked 15 goals at home, more than Bournemouth or Villa, and they have won just three of their nine games at the Emirates, hardly a surprise given how many opportunities they are offering up for opponents. Chelsea have won six of nine away and are happier when teams come on to them.

Lampard’s men are also suspect at the back – they are eight points better off than their rivals but they have conceded only one goal fewer. Bookmakers anticipate plenty of goals – over 2.5 is as short as 1-2 – and tired legs at the end of a busy week could well see plenty of mistakes. Over 3.5 may well see some support.