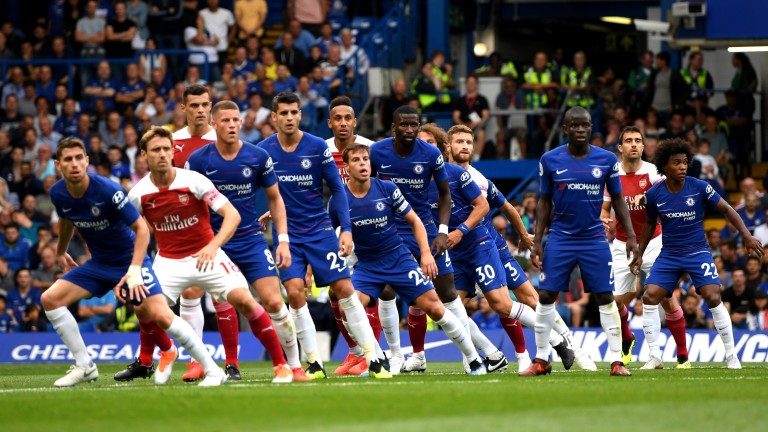 Arsenal and Chelsea players jostle for position at a free-kick in August's meeting
Getty Images
1 of 1
By Steve Davies UPDATED 2:55PM, JAN 19 2019

The London derbies are coming thick and fast and this Premier League dust-up between Arsenal and Chelsea looks a tricky one to call.

Punters must decide whether to take a chance on an increasingly inconsistent Arsenal at a fairly decent price or side with the more reliable but less entertaining visitors.

The gap between these sides stretched to six points last weekend when fifth-placed Arsenal crashed 1-0 at West Ham a few hours before Chelsea, in fourth, pipped Newcastle 2-1.

Neither side was impressive and that has been the case for a few weeks.

The Gunners have bags of firepower and look a threat whenever they go forward but they ship far too many goals. Chelsea continue to be a neat, slick passing machine but are looking lamer than ever in the final third.

The layers expect goals – it was 3-2 to Chelsea when they met at Stamford Bridge in August – but this clash is not guaranteed to be a classic. The 6-5 for under 2.5 goals appeals more because that’s the way Chelsea are evolving.

After an exciting and a free-scoring baptism under Maurizio Sarri, opposing sides have worked them out. Chelsea's last eight games have produced 11 goals and with Eden Hazard leading the line rather than acting as the main creative influence they are less potent.

In contrast, Arsenal’s games are generally full of goals. They’ve failed to score in only two matches this season and have kept clean sheets in just three. Their matches are going at a league-high 3.55 goals per game.

But they were disappointing going forward at West Ham last week and they are going to have to work hard to break down a decent Chelsea defence who are offered excellent protection from a tigerish midfield. They have conceded only eight goals in ten away games.

Not being able to trust either side brings the draw into the equation, especially if loads of goals aren’t necessarily forthcoming.

Arsenal’s record on their own patch is solid this season. They lost at home to Manchester City in August and have been beaten only once at their own place since, against Spurs in the League Cup.

Among their better displays in front of their own supporters were a 1-1 draw against Liverpool and 4-2 demolition of Tottenham in the league, a performance of passion and fire which hasn’t been their hallmark in recent times and should augur well going into another local derby.

Chelsea have been throwing in the odd loss – their last one was also against Spurs who they take on again next Thursday in the League Cup semi-final second leg.

Four of the last six meetings between these sides have ended in draws after 90 minutes. None of the last seven showdowns has been won by more than one goal.

These are historically close-fought affairs and this one is poised to continue the trend.

Arsenal
Rob Holding, Henrik Mkhitaryan and Danny Welbeck are all injured. Mesut Ozil could return after a three-week absence.

Chelsea
Ruben Loftus-Cheek is definitely out. Alvaro Morata could return to the squad despite being linked with a move to Atletico Madrid.

Key stat
Arsenal’s matches have produced 78 total goals – the most in the Premier League.