Premier League | Aubameyang and Lacazette ready to fire for Gunners 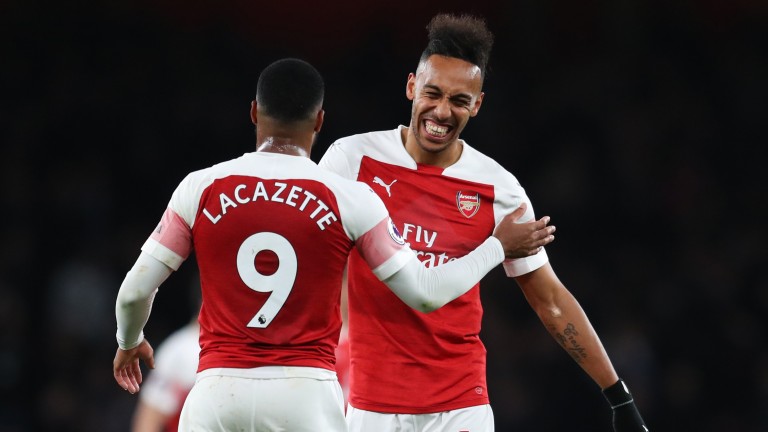 Pierre-Emerick Aubameyang and Alexandre Lacazette
Catherine Ivill
1 of 1
By Mark Langdon 8:00PM, MAY 4 2019

Cardiff's failure to beat Crystal Palace means Brighton have survived their Premier League relegation battle but there could be little for the Albion to celebrate on the pitch at Arsenal.

The Gunners also had good news with Tottenham's defeat at Bournemouth and they look set to narrow the gap on their local rivals to just two points.

Arsenal, with the exception of the surprise 3-2 reverse at the hands of Palace last month, tend to be a reliable betting proposition at home.

Palace, Wolves and the top two of Manchester City and Liverpool are the only sides to have escaped the Emirates without defeat in this season's Premier League and Arsenal showed their north London prowess in Thursday's Europa League 3-1 semi-final first-leg success over Valencia.

The Gunners' front pairing of Pierre-Emerick Aubameyang and Alexandre Lacazette were both on target in midweek.

They have 32 Premier League goals between them and can be happy enough with their personal contributions, even if Unai Emery is still struggling to accommodate them in the same team and the side looks manic at times.

Finding the right equilibrium will be high among Emery's priorities over the summer, although it is usually cheaper and easier to bring in defensive reinforcements than improve the attacking areas.

Brighton's balance also need sorting, for a different reason. They have totally lost their attack in recent months, coinciding with a slide down the Premier League standings.

No wins in nine matches in all competitions is bad enough, however, it's not even the biggest problem for the Seagulls.

Albion have scored just once in their last eight matches and forced only ten shots on target in that period.

Glenn Murray has had a fine season to reach 11 league goals, with centre-back Shane Duffy next in the pecking order with five as a number of Chris Hughton's summer signings have failed to fire.

The chief flop is record signing Alireza Jahanbakhsh, the latest Eredivisie arrival to be seemingly flattered by impressive figures in Holland.

The Dutch Golden Boot winner has scored no goals and made no assists and was left out of the squad for last week's 1-1 draw with Newcastle. Apart from that it has been money well spent!

Given Brighton's attacking woes it may be worth taking the hosts to win to 2-0 and 3-0. Arsenal have a reputation for being leaky at the back, however, they have kept six clean sheets in their last nine at the Emirates.

Brighton
Jose Izquierdo and Davy Propper have been ruled out. Beram Kayal has recovered from injury.