The Gunners are chasing top spot 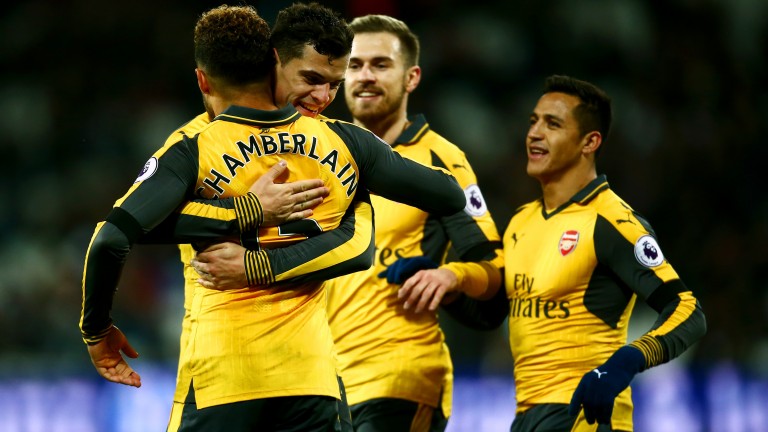 Arsenal celebrate during the victory against West Ham
Jordan Mansfield
1 of 1
By Steve Davies 7:53PM, DEC 5 2016

Securing top spot in qualifying is, not for the first time, out of Arsenal’s hands, though they can at least produce the victory in Basel which will give them a chance of pipping PSG.

Arsene Wenger’s men need to produce a better result in Switzerland than Paris Saint-Germain do against Ludogorets to climb above Unai Emery’s men and so enjoy the novelty of going through as group winners.

The Parisians are a short price to do the business in the French capital, but Arsenal would kick themselves if their rivals slipped up and they’d failed to complete the double over Basel.

To that end, and presumably determined not to lose two cup ties in a week, take Arsenal to keep to their part of the bargain at a decent price of 11-8.

Take the EFL Cup quarter-final defeat by Southampton out of the equation and the Gunners are flying, and anyway, Wenger will send out his first team tonight rather than the mob who flopped against the Saints.

They’ve drawn twice with PSG and taken the maximum nine points off Ludogorets and Basel.

Basel, in contrast, have managed just a pair of draws against the Bulgarian champions though they do have a carrot being dangled in front of them in the shape of a place in the Europa League.

Once upon a time, you could only ever refer to St Jakob-Park as a fortress but that’s no longer the case.

Basel were poor in that 1-1 draw with Ludogorets and then beaten by Paris Saint-Germain and Arsenal have little to fear.

Urs Fischer’s men, the runaway Swiss leaders, lost their unbeaten league record at the weekend when they were deservedly beaten 3-1 at Young Boys.

Marek Suchy, for so long the rock at the heart of their defence, had a horror show in Berne and hasn’t looked confident all season. Strikers Marc Janko, Seydou Doumbia and Andraz Sporar have failed to conjure up a single European goal between them and Fischer is getting plenty of flak for the style of the team.

The accusation is that Basel are a competent group of individuals that don’t work as a team.

That said, they are still 12 points clear in the league though that merely demonstrates the gulf between the Swiss Super League and European Champions League.

You won’t be bowled over in the rush to back Janko at 6-1 to be first scorer or Doumbia at 13-2, a market where feared Arsenal twosome of Alexis Sanchez and Olivier Giroud are 5-1 shots.

If Giroud plays, Sanchez (if picked), won’t play at the head of the attacking four, though that won’t be an excuse if the Chilean fails to add to the 15 goals he has scored for club and country.

Interestingly, their top scorer in the Champions League this season is Mesut Ozil with four, yet the German, who bagged the opener in Saturday’s 5-1 win at West Ham, is 10-1 to score first. Ozil has got eight for the season for Arsenal.

Team news
Basel
Midfielders Jon-Paul Boetius and Kevin Bua are both injured. Marc Janko is available after a domestic suspension.

Arsenal
Francis Coquelin is suspended. Right-backs Hector Bellerin and Mathieu Debuchy are injured, so too is midfielder Santi Cazorla.