Clarets could get dragged back into survival battle 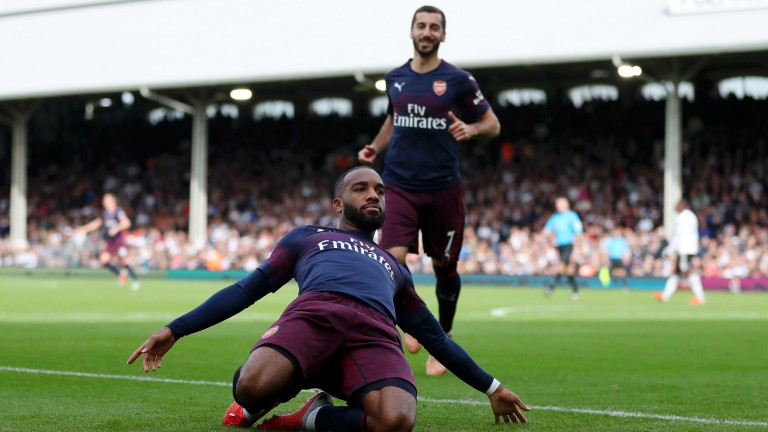 Arsenal broke into the top four for the first time this season after beating Fulham 5-1 at Craven Cottage and cannot be discounted in the race for Champions League qualification.

Since losing to Manchester City and Chelsea in their opening two games Arsenal have responded with nine consecutive victories.

And their triumph at Fulham was the most impressive of the lot.They were stronger than the Cottagers in all departments.

The foundations for the win were laid by striker Alexandre Lacazette, who popped up with a pair of brilliant finishes to take his tally for the season to four.

Substitute Pierre-Emerick Aubameyang joined the party, supplying an assist and two well taken goals in a 30-minute cameo, and Arsenal did not miss Mesut Ozil, who was absent with a back injury.

The Gunners seem to have a better balance between defence and attack when Ozil is not involved and the German could have a battle on his hands to get back into the side.

2 Burnley burst is unlikely to last

Burnley have put their early-season troubles behind them by taking seven points from the last three games but there are clouds on the horizon for the Clarets, who could be dragged back into trouble by the end of November.

Sean Dyche's side remained five points above the drop zone after drawing 1-1 at home to Huddersfield on Saturday but it was neither the result nor the performance they would have hoped for.

On paper Huddersfield at home should be one of the easiest fixtures of the campaign but Burnley were outplayed for large parts of the contest and lost the shot count 19 to six.

They weren't much better at Cardiff the previous weekend, losing the shot count 20 to three and scraping a 2-1 victory, and, if performances do not improve, results may take a turn for the worse.

Between the October and November international breaks, Burnley play away to Manchester City, at home to Chelsea, away to West Ham and away to Leicester.

It is hard to see them getting many points from those games and they could head into the winter period with a tough survival battle on their hands.

3 Toffees could be top-six contenders

Marco Silva was brought to Everton to get the club closer to the top six and the signs are looking positive for the Portuguese, who is in charge of a talented squad.

Successive wins at home to Fulham (3-0) and away to Leicester (2-1) have lifted Everton to 11th but they are capable of climbing a lot higher.

In recent years Everton have been guilty of overpaying for ordinary players but some of their summer business has looked inspired.

Richarlison has made an immediate impact, scoring four goals in six games, and has the the pace, power and skill to develop into one of the outstanding talents in the division.

Winger Bernardo has taken a bit longer to settle but made his first start at Leicester and came up with an assist in an impressive individual performance.

Offensively, Everton look a force. They need to tighten up at the back but if defender Yerry Mina (who has been injured) can live up to his billing, Everton may emerge as surprise top six contenders.

Tony Pulis was seen as the safe pair of hands Middlesbrough needed to lift them out of the Sky Bet Championship but his cautious tactics may be holding Boro back in the race for promotion.

Last season Middlesbrough were the lowest scorers among the top six and their unadventurous style cost them in the playoff semi-finals as they lost 1-0 on aggregate to Aston Villa.

This term nothing much has changed and Middlesbrough continue to rely heavily on stout defence.

They have conceded six goals (the fewest in the division) but have scored just 14 (the lowest among the top eight) and seem to lack a plan B whenever they concede the opening goal.

They have fallen behind in just two of eight league games and lost both – 1-0 at Norwich and 2-0 at home to Nottingham Forest.

There were sighs of relief among Plymouth supporters on Saturday after a winless start to the season came to an end with a 1-0 success at home to Wimbledon.

Argyle are still four points adrift of safety but their performances have been steadily improving.

This time last season Plymouth had two points fewer but recovered superbly and finished the season just three points outside the playoffs.

It may be too soon to anticipate another promotion push but with key attacking players Graham Carey and Ruben Lameiras getting back to their best, Argyle should be a tough team to face in the weeks ahead.