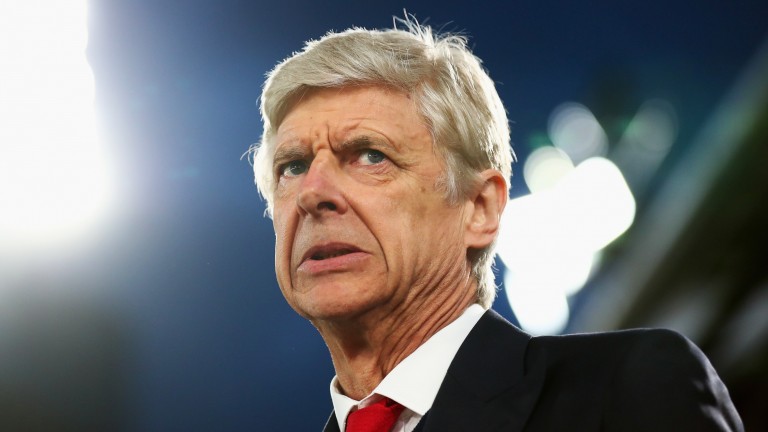 Arsenal have qualified for the Champions League in every full season since Arsene Wenger arrived in north London in September 1996 but they need plenty of help on the final day of the season if that record is to remain.

Not even a win against Everton at the Emirates will be enough should Liverpool beat Middlesbrough and Manchester City get a point at Watford, while even a narrow defeat should be enough for Pep Guardiola’s side at Vicarage Road.

Arsenal are 6-1 with Betfair and Paddy Power to squeeze into the Premier League’s top four and Liverpool are 1-7 with BetBright.

Third-placed City are 100-1 with Sky Bet to miss out as the Manchester men have three more points than Arsenal as well as a goal difference that is five superior.

There are a bunch of unlikely eventualities which could lead to a playoff should all points, goals scored and conceded be the same, but it is even more far-fetched than Hills quote of 200-1 for a 39th match would suggest.

However, despite the probable absence of Champions League football at Arsenal it seems increasingly likely that Wenger will remain at the club beyond this summer.

Betway are 1-16 that the Frenchman is at the helm for the start of next season.

There is not much else to sort out on the final day with Tottenham’s Harry Kane 1-16 to claim the top goalscorer honours. The Spurs forward heads to Hull two clear of 16-1 Romelu Lukaku and three ahead of 35-1 shot Alexis Sanchez with those two on opposite sides at the Emirates.

Millwall were promoted to the Championship after beating Bradford 1-0 in the Sky Bet League One playoff final.

Steve Morison was the Lions' hero, scoring the only goal of the match with five minutes remaining.

Sky Bet rate Millwall 50-1 to win the Championship next season – only 80-1 shots Burton and Barnsley are bigger prices. Bradford are 12-1 to win League One and 4-1 to gain promotion with the league sponsors.

Inverness have been relegated from the Ladbrokes Premiership despite beating Motherwell 3-2. Caley Thistle had been 11-1 to finish bottom ante-post, while Hamilton are in the playoff against Dundee United.

There was plenty of drama in the final round of the Bundesliga as Hamburg survived and sent opponents Wolfsburg into the playoff with a thrilling 2-1 triumph.

Borussia Dortmund needed penalties in the last 15 minutes from Marco Reus and Pierre-Emerick Aubameyang to beat Werder Bremen 4-3 and qualify automatically for the Champions League.

Hoffenheim, who drew 0-0 with Augsburg, will have to go through the playoff route after finishing the season fourth.